Looks Like Sweden's Pandemic Strategy Was the Right Way After All 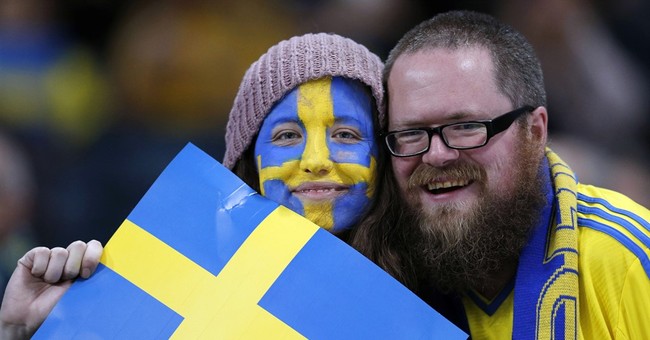 FILE – In this Tuesday, Nov. 19, 2013 file photo, Sweden fans pose with a Swedish flag before the World Cup qualifying soccer match between Sweden and Portugal in Stockholm, Sweden. For the first time since record-keeping began in 1749, Sweden now has more men than women. Swedes don’t quite know what to make of this sudden male surplus, which is highly unusual in the West, where women historically have been in the majority in almost every country. But it may be a sign of things to come in Europe as changes in life expectancy and migration transform demographics. The tipping point in Sweden happened in March 2015, when population statistics showed 277 more men than women. (AP Photo/Frank Augstein, file)

“They called me a madman.”

Sweden was dogpiled with derision when it announced how it would handle the pandemic. As Fredrik Erixon of Sweden wrote at the Spectator on April 1, Sweden took an approach of caution about the virus, but refused to institute an all-out lockdown. Establishments remained open as the people did what they could to maintain a safe environment:

We worry about COVID-19 a lot. Many people work from home. Restaurants are open, but not bustling. Keeping two meters apart at bus stops is something Swedes were pretty good at before the crisis: we don’t need much encouragement now. We’re careful. But our approach to fighting the pandemic starts from something more fundamental: in a liberal democracy you have to convince and not command people into action. If you lose that principle, you will lose your soul.

Stefan Löfven, Sweden’s center-left premier, has dismissed calls for a lockdown, saying ‘we can’t legislate and ban everything’. He’s no evangelist for libertarian principles, and may yet bring in harder measures. But so far he’s been saying that ‘we all, as individuals, have to take responsibility’ and not just wait for the government to lock us up.

At the center of our debate is Anders Tegnell, the ‘state epidemiologist’, and Johan Giesecke — an epidemiology don (and one of Tegnell’s predecessors) who has captured the country’s attention with his no-messing attitude. Both advise caution — and common sense. As in Britain and the US, many scientists have appealed to the government to close schools and impose curfews. Unlike in Britain and the US, the authorities have calmly responded by explaining how this wouldn’t really help. They publish their own models of the virus spread. It shows how many people will need hospital care: the system, they say, can cope. And when asked, they say they don’t think Imperial College has made a better call.

As it turns out, we now know the Imperial College was wrong. The models they gave the world that showed millions dead in the streets was a bit sensationalistic. Sweden’s models, however, proved to be more accurate. Their advice to their citizens was also more sensible: “Be sensible.”

When Erixon applauded Sweden’s move, he and the country were endlessly lambasted. Fast forward to today and Erixon has a fascinating update.

“Come back in two weeks, I was told. Let’s see what you’re saying then. So here I am,” wrote Erixon on Monday.

Apparently, all of the problems that people predicted for Sweden haven’t arisen. In fact, it’s far from needing to panic at all. For one, its hospitals are well within comfortable ranges of beds and while there’s a steady flow of sick people, the numbers haven’t grown. In fact, there’s evidence the number of people contracting the virus are going down:

We now have about 530 patients in intensive care in the country: our hospital capacity is twice as high at 1,100. Stockholm now averages about 220 critical care patients per day and its hospitals, far from being overwhelmed, have capacity for another 70. Stockholm also reports that it has several hundred inpatient care beds unoccupied and that people shouldn’t hesitate to seek hospital care if they feel sick. A new field ward has been set up in Stockholm for intensive and inpatient care and some predicted it would start getting patients two weeks ago. It hasn’t received any patients yet.

Even its economy is doing fine:

We are pretty far away from the levels of economic decline predicted for most lockdown countries. In fact, the Swedish economic situation looks sensationally positive when compared to the ghastly reports and scenarios elsewhere. Cash turnover indicators, for instance, suggest that personal consumption in Denmark and Finland has dropped by 66 and 70 percent respectively — compared to less than 30 percent in Sweden. Unemployment benefit claims in Norway have shot through the roof and grown four times as fast as in Sweden. Fiscal deficits in the UK and the US are likely to be in the region of 12 to 15 percent. Last week’s economic scenario from the OBR suggested that Britain’s GDP could drop by almost 13 percent this year.

One can’t see this and wonder if the United States was a bit dramatic in its approach to dealing with the virus. Given, Sweden and the U.S. are two different countries with two different cultural dynamics. Their boot wouldn’t completely fit our foot, but we could have gotten a similar make and saved Americans a lot of grief.