We're Giving Our Country Away by Neglect 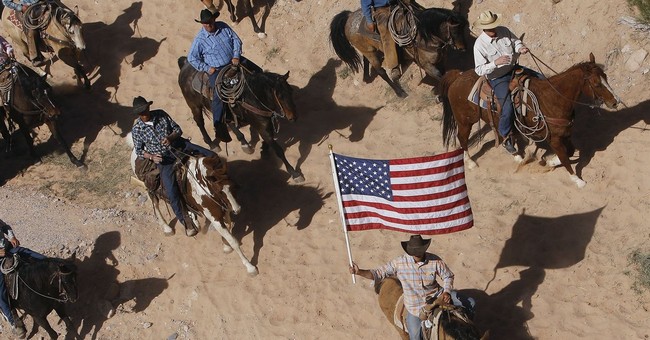 FILE – In this April 12, 2014, file photo, the Bundy family and their supporters fly the American flag as their cattle is released by the Bureau of Land Management back onto public land outside of Bunkerville, Nev. The trial starting Monday, Oct. 30, 2017, for 71-year-old Cliven Bundy, sons Ryan and Ammon Bundy, and Ryan Payne of Montana alleges that they led a self-styled militia to prevent the U.S. Bureau of Land Management from enforcing court orders to stop Bundy cattle from grazing in what is now Gold Butte National Monument. (Jason Bean/Las Vegas Review-Journal, via AP, File)

I will blow this whistle till I pass out. I know I’ve written twice on this already today, but I’m pretty fired up about it and you should be too.

Even if you aren’t religious, the importance of the freedom to practice a specific belief in the company of those who share that belief is a cornerstone of our Democracy. I know you hear that a lot about various groups like transgender people, but that’s nonsense. This is not.

Even if not Christian, most people believe in something, and the ability to practice that belief is so important that our framers essentially made it page one of the Bill of Rights. It comes first before all others.

Yet, we see authorities left and right attacking congregants for practicing their First Amendment rights.

(READ: Sheriff Claims Pastor Hid Congregants from Him On Easter and Is Fining Him $1,000 With a Threat of Jail Time)

(READ: A Mississippi Mayor Dug in on Banning Drive-In Church Services, but Then Bill Barr’s DOJ Stepped In)

What bugs me even more about this is that citizens are justifying the authorities riding roughshod over our rights in the name of making sure that the virus doesn’t spread. I get the fear, but I can’t pardon the action.

Do we the people rule America or does the virus?

The virus is dangerous and precautions should be taken but not only should we not be ruled by it but we should not allow our elected officials to believe the virus is an excuse to exert authority. The fact that many of us have willingly rolled over is horrifying. Everyone seems to have forgotten about the fact that we have inalienable rights that can’t be touched by any governing figure.

The proof is there in the open.

Watch this clip from Tucker Carlson Tonight last night, where show host Carlson asks New Jersey Governor Phil Murphy where he gets the authority to nullify the Bill of Rights.

Spoiler Alert: Murphy admits he wasn’t even thinking about the Bill of Rights.

TUCKER: “By what authority did you nullify the Bill of Rights in issuing this order?”

GOV. MURPHY: "I wasn't thinking of the Bill of Rights when we did this.”

TUCKER: “Well, I can tell.” pic.twitter.com/XzRUTZFcmL

If we’ve rolled over, then we’ve lost the United States. If we’ve not just forgotten our basic freedoms but even applaud as they’re taken from us, then this isn’t the America we cherish.

I don’t want to write a “where my country gon'” article but I think it’s important to know that with this reaction to the pandemic, we’ve set something of a precedent with how far we’re willing to go in terms of our obedience and that future authoritarian leaders will look to this as something of a gauge.

Without us standing up against them, even with our Constitution and our rights clearly outlined, they will walk all over us, smiling as they do it in their self-satisfaction that they do so for what they consider the betterment of mankind.

I’m very happy to see the protests happening in Michigan against Whitmer. I want to see more. I want our leaders to see the results of overextending their authority. I don’t want them to believe that the Overton window has shifted so far that we’re just good with obedience.

That means standing up and saying something even when people of a different religion you don’t practice get attacked or oppressed. It might start with them, but it won’t end with them. Eventually, you’ll get walked on, too.