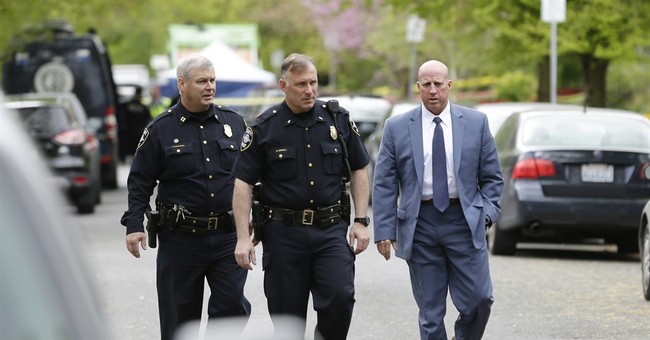 Seattle Police assistant chief Robert Merner, right, walks with other officers, Friday, April 15, 2016, after human remains were found in a nearby container in Seattle. Seattle Assistant Police Chief Robert Merner said authorities were investigating the probable connection between the remains found Friday and the recent murder of Ingrid Lyne, whose partial remains were found in a recycling bin earlier in the week. (AP Photo/Ted S. Warren)

Despite this clearly being a time when we should put politics aside, the left can’t seem to put their hatred for President Donald Trump, or anything right-leaning for that matter, away. In Seattle, the local NPR station decided it was no longer going to air Trump’s daily briefings around the Wuhan Coronavirus.

“KUOW is monitoring White House briefings for the latest news on the coronavirus — and we will continue to share all news relevant to Washington State with our listeners,” tweeted KUOW. “However, we will not be airing the briefings live due to a pattern of false or misleading information provided that cannot be fact checked in real time.”

However, we will not be airing the briefings live due to a pattern of false or misleading information provided that cannot be fact checked in real time. (2)

Leave it to the left to misrepresent the facts and twist opinion into a position of fact, and on the taxpayer’s dime no less.

As it turns out, the Seattle Police Officers Guild didn’t appreciate the move by KUOW and decided that if the news station wasn’t going to allow the news to flow to the people without filtering it through their biased takes on it first, then the police would. According to the Daily Caller, the guild issued a statement slamming the station for its bias and picking up the torch it threw down:

“In light of the recent decisions made by a public news affiliate, SPOG will be live streaming all the White House’s press COVID-19 briefings on our social media channels,” SPOG president Mike Solan said in a statement. “This is not a time to play partisan politics. Seattle community members deserve the most up to date information during this crisis; this includes life saving medical information from our nation’s Surgeon General and top doctors.”

“We, at SPOG, see COVID-19 as a public safety issue and are continuing to do all we can to serve you and protect lives in our community,” he added, echoing sentiment expressed by the White House on NPR’s decision.

“It’s not surprising, but also a failure of their duty to the American people, that some media outlets would choose to block their audiences from receiving accurate, up-to-date information on President Trump’s whole-of-government approach to slowing the spread of COVID-19,” White House deputy press secretary Judd Deere told Daily Caller. “No other Administration has been as transparent and as accessible as this one, and we will continue to make sure this Nation hears from its leaders and top health experts during this global pandemic.”

Pundits at leftist news outlets such as MSNBC and CNN have all suggested that Trump not be aired live, and instead, news organizations should not air the briefings, watch them themselves, and then filter the news through what they deem is truthful or necessary for the people to hear.

“If the president does end up saying anything true, you can run it as tape. But if he keeps lying like he has been every day on stuff this important, we should, all of us should stop broadcasting it,” MSNBC’s Rachel Maddow suggested. “Honestly, it’s going to cost lives.”

To be clear, this is the media deciding what you should and shouldn’t hear. They don’t seem to believe it should be necessary for the people to decide for themselves what they should hear or what is and isn’t factual. Forming your own opinions shouldn’t be allowed according to them. Instead, they seem to believe you should only be given their approved narrative.

God bless the local police in Seattle for stepping up and giving the people the news unfiltered and getting those in Seattle around people who want to tell you what to think. Should this happen anywhere else in the nation, SPOG has set an example for the rest of the departments in the nation to follow.