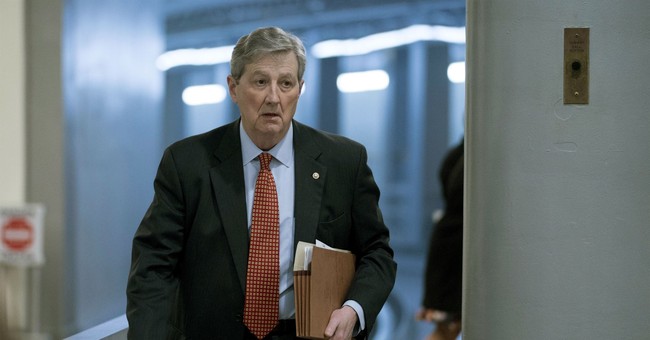 In this Dec. 19, 2017, photo, Sen. John Kennedy, R-La., arrives on Capitol Hill in Washington. Kennedy, the Republican senator who became an Internet sensation with his rapid-fire takedown of President Donald Trump’s judicial nominee received an unexpected call _ from the president. “He said, ‘look, Kennedy, do your job. I’m not upset or angry. I’ll never criticize you for doing what you think is right,’” recalled Kennedy of last week’s phone conversation. (AP Photo/Andrew Harnik)

In the shadow of every Democrat voting down a stimulus bill that they helped create, many Republicans are rightfully furious. It’s clear that the Democrats came to play politics, not help the American people.

It’s not just a bad look for Democrats, but for Washington overall, and Sen. John Kennedy (R-La.) took to the Senate floor in order to demolish Democrats for their transgressions against the American people, starting with a solid burn.

“Do you know what the American people are thinking right now? They’re thinking that the brain is an amazing organ. It starts working in a mother’s womb, and it doesn’t stop working until you get elected to Congress,” said Kennedy.

“They’re thinking that this country was founded by geniuses but is being run by a bunch of idiots,” he added.

Kennedy reminded the floor that the stimulus bill isn’t a Republican bill, and was bipartisanly created after hours of negotiation between both parties. He also called out Democrats for their use of buzzwords to define the bill such as “slush fund” for corporations.

“This bill is going to help every small business in this country. It’s not a bailout. It provides up to $350 billion for small businesses for the next eight weeks to keep going, and if they don’t lay anybody off the loans are forgivable,” said Kennedy.

On Sunday, Senate Majority Leader Mitch McConnell also slammed Democrats for their political maneuvering at the cost of Americans and their livelihoods.

“Hopefully, some adults will show up on the other side of the room and understand the gravity of the situation and the need to act before the markets go down further and the American people become more depressed about our lack of ability to come together under the most extraordinary of circumstances,” said McConnell.

At this time, Democrats are currently demanding that non-virus related additions be made to the bill including increased bargaining power for unions and tax credits for wind and solar energy companies.