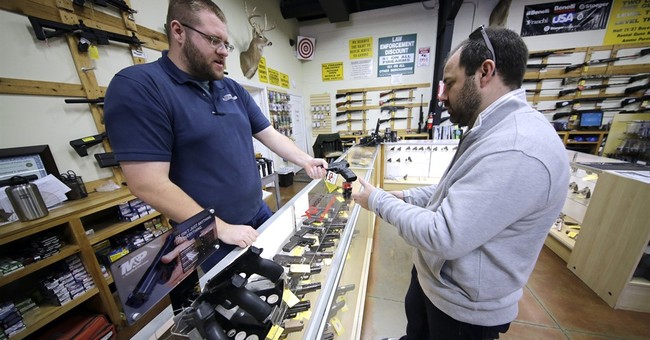 Mike Howse, left, helps David Foley as he shops for a handgun at the Spring Guns and Ammo store Monday, Jan. 4, 2016, in Spring, Texas. President Barack Obama defended his plans to tighten the nation’s gun-control restrictions on his own, insisting Monday that the steps he’ll announce fall within his legal authority and uphold the constitutional right to own a gun. (AP Photo/David J. Phillip)

The Wuhan virus has had some interesting effects on people’s buying habits. Despite it being a respiratory sickness, toilet paper and paper towels have flown off shelves faster than grocers can keep them stocked. However, the virus has inspired other purchases to happen as well, namely in the realm of guns and ammunition, many of them purchasing guns for the first time.

According to the Sacramento Bee, gun store owners have seen an interesting uptick in gun purchases from those who typically wouldn’t have a gun in their home.

“People who tell me that they don’t like guns, but they’re here to begrudgingly buy one,” said Gabriel Vaughn, owner of Sportsman’s Arms in Petaluma according to the Bee. “And if it makes somebody feel safe and they’re legal to own one, then sure.”

Websites like ammo.com report that sales are up 68 percent from Feb. 23 to March 4 than they were the previous 11 days, with residents in Georgia and North Carolina seeing the largest boost in sales.

According to the Bee, various store owners are seeing rising sales across the nation:

“I think with the way things have escalated quite quickly around the world and in the U.S. in just the last couple of weeks, it’s very hard to tell what’s going to happen next, and I believe it is better to be safe than sorry,” Lim said. “That’s what our business is about, after all, keeping people safe.”

The owner of LEPD Firearms in Columbus, Ohio, told WKRC that his customers are not panicked, but are preparing for COVID-19 to worsen.

“It’s an unknown, so there are people that are concerned,” Duane Pohlman told WKRC. “In those times of uncertainty, people have a reaction to make sure they want to protect themselves and their families, and I think that’s what we’re seeing especially here in our store.”

Most of the guns Larry Hyatt, the owner of Charlotte’s Hyatt Guns, is selling are of the self-defense variety — including AR-15s, he told BuzzFeed.

Reports also indicate that many purchasers are Asian-American, many who are afraid of the discrimination they face due to Covid-19’s origination in China:

Most of the gun sales of Wade’s Eastside Guns in Bellevue, Washington, were by people of Asian descent, the store’s internet sales manager told The Trace. Sales at the store have increased sixfold since the pandemic began, Cole Gaughhran said.

“The main thing I’m hearing is that they don’t want to get jumped because of their race,” Gaughran told The Trace.

Ukraine's President Just Blew Up Joe Biden's Spot on the Whole Situation With Russia
Townhall
President Biden had some, er, interesting moments during his infrastructure speech in Pittsburgh
Twitchy
Election Law That Helped Make Joe Biden President Struck Down as Unconstitutional
Redstate
[WATCH] Student Destroys School Board with Withering Speech: 'Thank You For Teaching Us We Should Never Question Authority'
PJ Media