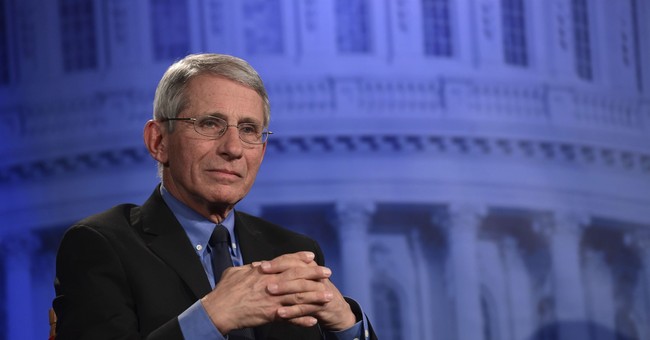 Dr. Anthony Fauci of the National Institutes of Health listens to a question during an AP Newsmaker interview in Washington, Thursday, Jan. 18, 2018. (AP Photo/Susan Walsh)

Nothing is better for the media than a disaster, especially if they can use it as a tool to beat President Donald Trump over the head with. There is literally nothing Trump can do to make these people like him. Nothing he can do to please them.

In that spirit, the media wants nothing more than to have people outside their own circles bash Trump, and that includes medical experts. ABC’s Good Morning America attempted to do just that during an interview between co-anchor Cecilia Vega and the National Institute of Allergy and Infectious Diseases Director Dr. Anthony Fauci.

During the interview, Vega attempted to bait Fauci into a Trump-bashing session. Not only did she fail to do that, the good doctor even corrected Vega on her assumption.

“Dr. Fauci are there people who are people walking around right now and have the virus and don’t know it because of this lack of testing?” Vega asked.

“Well, I’m not so sure it’s because of the lack of testing, but I think clearly the system as it was originally designed, was very good for what it was designed,” said Fauci. “Now looking forward, we’re changing it rapidly, so you know, rather than playing Monday morning quarterback, let’s look ahead.”

“And I believe, what we’re hearing at the task force that we are now getting into that phase where we’ll really be able to scale it up a lot,” he continued. “So I think in the next week or so, you’re going to see an acceleration of availability of tests.”

“Well, I want to get your take on the messaging from the White House right now because it was just yesterday that President Trump himself said that frankly, the testing has been, quote, very smooth,” said Vega. “Are Americans getting mixed messages on this front? Is it accurate, Dr. Fauci, to say that the testing has been very smooth?”

Fauci cut to the heart of the matter and told Vega that he doesn’t want to get involved with contradicting or not contradicting Trump. He reiterated that the way the system was designed originally wasn’t for broad blanket testing but that now we should see a quick rollout of testing capability for the virus.

Vega brought up that California testing kits were missing components, to which Fauci told her that this definitely was a mistake, but that it’s currently being corrected and quickly.

Fauci finished by answering a timeline question, noting that we could be in this situation as a nation from anywhere between three to eight weeks.

Is This Why Harmeet Dhillon Fell Short in the RNC Chair Race?
Townhall
President Biden gives his 'word as a Biden' and LOL
Twitchy
Kevin McCarthy Hits Nail on the Head on 'Face the Nation' After Question on GOP 'Election Deniers'
Redstate
Are 'The Walls Closing In' on Joe Biden? New Details Raise Questions
PJ Media