It was a great man who once said that we should judge each other, not on the color of our skin, but on the content of our character. Fifty-six years later, a minority of people in America could care less about the level of melanin you’re sporting, and more concerned about whether or not you can do a job.

According to PEW, while a majority of people say that it’s important for companies to promote racial diversity in the workplace, they also believe that merit and capability should come first.

Americans were asked “When it comes to decisions about hiring and promotions, companies and organizations should,” only 24 percent said they should take race and ethnicity into account in order to make the workplace more diverse.

A whopping 74 percent said that only qualifications should matter, even if it results in less diversity. 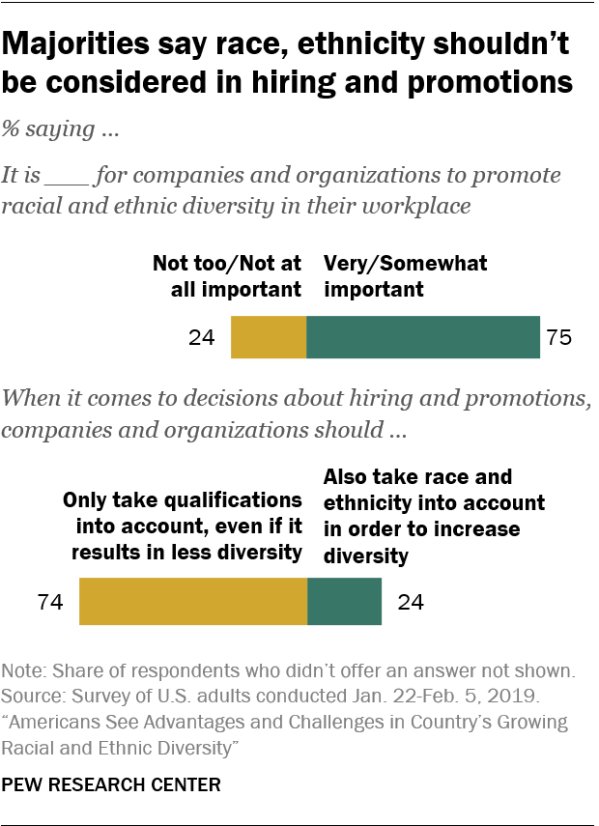 Despite the fact that this is 24 percent too many, this is, by far, a good thing. A workplace hiring based on merit and competence is going to succeed far more than a company hiring based on someone’s race. Not only is that a racist act, but it also opens the company up for horrific underperformance or worse.

Of course, not everyone agrees with this, and believes that diversity in the workplace needs to be forced.

“In both situations, people value the end result. They want a diverse campus, they want a diverse workplace, but they’re not necessarily ready to do the work to get that,” said Democratic pollster Pia Nargundkar according to MSN.

“They sort of want diversity to magically appear in both of these places without considering how that actually occurs,” she added.

I’m not sure that’s altogether accurate. Nargundkar is assuming that everyone has prioritized diversity in the workplace to the point of being ready to begin hiring people based on their skin color. A likely more accurate assumption is to say that people are far more open to a diverse workplace and would like to see it happen organically.

What the social justice community is doing when it comes to forcing diversity is to open up those who were brought in on superficial grounds to failure. These failures may result in firings and may cause undesirable numbers to accrue, which may lead to even larger problems.