Democrats: Shameful no Females Remain on the Ticket -- ALSO Democrats: Rules Are Changed to Block Tulsi Gabbard from Next Debate 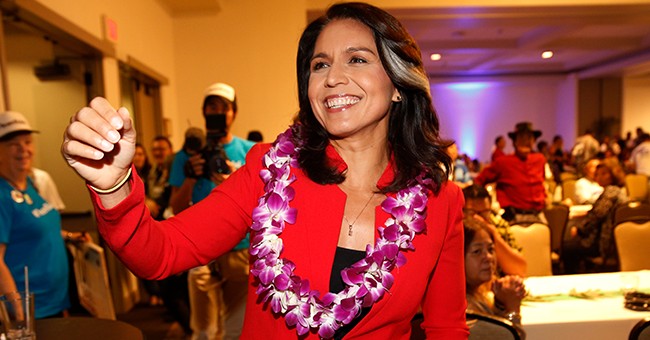 The party of identity politics cannot seem to identify its own hypocrisy.

The Democrats continue to manipulate standards in order to contort results to their liking. After primary results came in on Tuesday Hawaii Representative Tulsi Gabbard received a requisite amount of delegates to entitle her to appear on the stage at the upcoming Democratic debate, in Arizona. The announcement has been made by the DNC that a new set of rules is installed, and Gabbard will be declared ineligible for the March 15 debate.

Following a dismal ride on Super Tuesday, Elizabeth Warren announced she was shutting down her campaign for the presidency. What followed in the wake of her departure was a wave of politicians and pundits decrying that no females remain in the race. The prevailing attitude sounded like qualifications were secondary to internal plumbing.

The other problem with this is how misogynistic these experts were in their call for female empowerment because candidate Tulsi Gabbard is still a running candidate. It makes for a confounding reality within the Democrats. The complaint about lack of female representation is directed at the party that usually accuses others of sexism — yet those complaining are completely disregarding another woman in the process.

The Democrats had been under fire following the 2016 election for the manner they apparently tilted the contest in favor of Hillary Clinton. This led to the DNC announcing a series of election rules changes which would be implemented for this year’s campaign. Then the DNC promptly altered those rules on the fly, repeatedly.

Following her surprising performance at a debate where she cut Kamala Harris down a few notches, Gabbard saw herself getting sidelined by the party leadership for following debates. While Gabbard has appropriate poll numbers the party arbitrarily declared which polls would be accepted, allowing for her to be excluded by their whims. Later Michael Bloomberg was a fixture on the debate stage, effectively buying his way in when the DNC altered standards again to see fit to include the billionaire. Now the DNC is erasing the rule book once again.

With a strong second-place performance in the US territory of Samoa Gabbard received two delegates, and this was sufficient for her to make the Arizona debate — by previous standards. However, now the DNC has elevated the percentage levels required to be invited to the stage, setting the table for only Joe Biden and Bernie Sanders to appear.

For this to be set in place while many on the left and the press are loudly complaining about sexism on display is a stark blindspot. While Gabbard is certainly more than a longshot to make an impact on the election to see the party leadership acting in such a blatantly dismissive fashion, all while there is bleating in the party ranks over gender treatment, is hilariously hypocritical. We have been granted permission to completely disregard the complaints about the issue from those who will not even heed their own lecture.