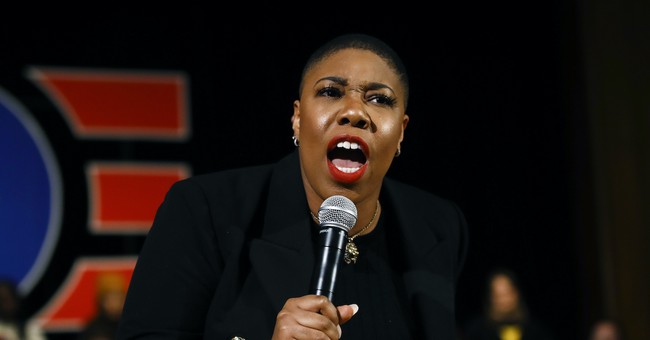 I guess Joe Biden isn’t the only part of his campaign that can devolve into incoherence on a live stream, but I’d think this example isn’t a result of dementia. Rather, she’s just choosing to outright lie.

Symone Sanders, who once worked for Bernie Sanders, is a senior adviser for the Biden campaign now. She “interviewed” Tony Goldwyn via one of their streaming hits and then went to Twitter to make a rather ridiculous assertion. She actually attempted to blame Republicans for the PPP money running out for small businesses.

Let’s talk about how unacceptable it is that this administration has run out of money for small business loans.

It is the president and his administration’s job to make sure all Americans are taken care of during this time. Leadership starts at the TOP.

She’s aware that Republicans have been pushing for a week to have a clean funding bill passed that replenishes the account, right? Did I miss where Sanders and her boss have come out and told Nancy Pelosi to stop holding its passage up?

When Democrats blocked more funding for the program, Joe Biden said nothing. pic.twitter.com/AQSJrY3QAg

When Nancy Pelosi was blocking that funding while doing interviews about ice cream, Joe Biden’s only contribution was to compliment her taste in ice cream. pic.twitter.com/265mKC7q9v

I think Biden and Symone need to lay off the sauce.

Sanders should probably do a little research on how appropriations work. If Trump could sign an order and money magically appear, I’m sure he’d do it. But that’s not at all how this works. I suspect Sanders knows that but is just choosing to misrepresent the situation.

This is all part of a bigger plan, though. You’ve probably noticed the recent attempts by the media and the Biden campaign to completely rewrite history regarding anything to do with the Wuhan virus. They are now claiming Biden saw everything early on. In reality, he was still holding public rallies in March. Someone like Symone Sanders can do the same revisionism with claims about small business loan funding because she knows she won’t be called on it by anyone but the right. There will be no fact-checks over at Politifact or snarky tweets from Glenn Kessler.

The gloves are off for 2020 and it’s why I could not care less about Trump attacking people on Twitter or whatever else upsets some conservatives. The other side is going to lie with a straight face all the way until November, and they’ll have 90% of the media supporting them. It’s time to play for keeps.