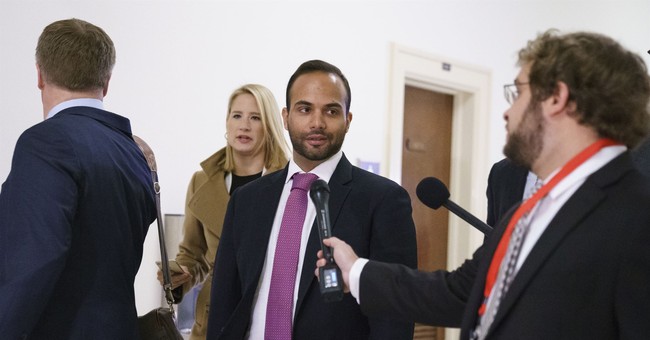 George Papadopoulos, the former Trump campaign adviser who triggered the Russia investigation, took to media as he arrives for his first appearance before congressional investigators, on Capitol Hill in Washington, Thursday, Oct. 25, 2018. (AP Photo/Carolyn Kaster)

More and more information regarding the FBI’s investigation of the Trump campaign continues to be declassified. Sen. Lindsey Graham deserves a lot of credit, as he’s been one of the forces behind this after sitting idle for years on the topic. A transcript from the 2016 conversation between Stefan Halper and George Papadopoulos is part of the latest dump and it’s very revealing.

In the conversation we see Halper, who was quite obviously acting on behalf of the U.S. government, doing his best to entrap Papadopoulos.

Here’s some of the conversation via The Daily Caller.

“I have a lot of friends in Russia,” Halper told Papadopoulos during their conversation, which occurred over drinks, and which the FBI recorded.

“My point is that,” Halper said, “the Russians can be very helpful to us at this time and we’ve got some great information coming out.”

Halper, a former Cambridge professor, rattled off the names of the Russians, Vyacheslav Trubnikov, Leonid Shebarshin, and Yuri Traughtoff, according to a transcript of the secretly recorded conversation released on Thursday.

The name dropping of Russian agents was purposeful. In this part of the back and forth, he’s attempting to gain Papadopoulos’ trust, showing him that he’s “down” with colluding with the Russians. He mentions that they have “great information coming out,” an obvious attempt to draw Papadopoulos in and get him to ask for said information from Halper. Had that happened, it would have been game over and the entire scheme would have worked.

While the IG report tries to paint this exchange as Halper simply trying to get Papadopoulos to admit he was working with the Russians, Halper is clearly trying to entrap Papadopoulos by getting him to take the fresh bait he’s throwing out. Throughout the back and forth, we see Halper try to signal that he’s got information from the Russians that could help the Trump campaign.

Halper would go on to play coy about Wikileaks, another pressure point he was hoping to see results from.

“You know this stuff out of WikiLeaks is really superb,” Halper said.

Eventually, Papadopoulos would shoot Halper down, no doubt much to the dismay of the FBI’s leadership.

“No one knows what he’s going to release,” Papadopoulos said of WikiLeaks founder Julian Assange. He said that Assange might release information about Trump as a “ploy to basically dismantle” and “undercut” the Republican.

Papadopoulos also said that the Trump campaign would not engage in “this type of activity because at the end of the day it’s…illegal.”

“This is a form of treason.”

Halper then took the extrodinary step of attempting to embed himself in the Trump campaign, offering to advise them in a foreign policy capacity.

The transcript shows Halper and Papadopoulos exchanged farewells, with Halper saying he would like to help the Trump campaign as an outside adviser on foreign policy issues.

The lengths to which the FBI went to try to take down the Trump campaign were just incredible. There is no argument left that this wasn’t intentional or that it was just a routine counter intelligence action. These were not mistakes. Rather, they were full steam ahead in doing whatever they could to get dirt on a rival political campaign in the middle of a presidential election.

Of course, the attempted entrapment of Papadopoulos is just one example. Carter Page’s mistreatment has been well chronicled as well, including the FBI withholding exculpatory information from the FISA court. The revelations in the transcripts above were also not shared, even as the FBI intensified their investigation. In other words, James Comey and the Obama administration were well aware that no collusion existed from the beginning.

Despite that, we spent almost four years having that false narrative pushed on us. The media played one of the largest roles, serving as a daily conduit for lying, self-serving FBI and DOJ officials who continually chose to selectively leak information. But as is tradition in Washington, no one has paid a price. A few people were fired from political appointments, but many of the worst offenders are still collected government checks. These people literally tried to destroy the lives of people, up to and including throwing them in prison, that they knew all along weren’t doing anything wrong. Think about how absolutely disturbing that is.

Our system is broken. Those that attempt to do stuff like this should be facing harsh punishments, as abuses of power like this are something most Americans can’t fight. Imagine if this weren’t as high profile of an issue? How many people are in jail right now because the FBI misused their power to target someone who did not have the exposure or means to clear themselves? Private citizens can rightly go to prison for years for insider trading, but FBI agents can try to setup a political opponent and the law shields them from liability.

Worse, the chances for changes to that system are dim. You can’t even get Republicans to agree that the FISA system is irreparably broken, much less that the FBI needs a total tear down and remake. We are currently awaiting the results of the Durham investigation, but it’s unlikely anyone gets charged with anything. Meanwhile, we could be just eight months away from the same people who so abused their power regaining it all back.

If for no other reason than this, it’s important Trump remains in office. Bill Barr needs to be allowed to finish his work so the pressure can continue to build. If Joe Biden wins, it’s immediately back to business as usual, with many of the same faces being reappointed. I’m not sure how the country survives that. Politics is one thing. This is something far different and more dangerous.