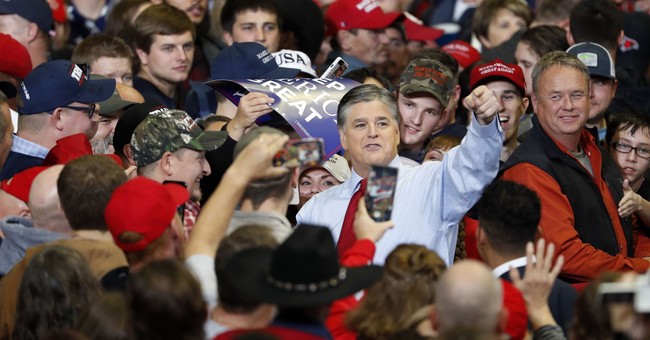 Television personality Sean Hannity points as he meets with members of the audience before the start of a campaign rally Monday, Nov. 5, 2018, in Cape Girardeau, Mo., with President Donald Trump. (AP Photo/Jeff Roberson)

One of the bigger divides within the conservative movement is just how important the “journalism” industry is. While most have ended up at the same place, you still have some on the right who insist that outlets like The New York Times and CNN hold value because of the importance of a “vibrant” press.

While I’m certainly not arguing against the ability of any outlet to say whatever they want, I’ll argue every time that there’s nothing intrinsicly valuable about the Times, nor the rest of their cohorts in the mainstream media.

For the latest example that more than bolsters my case, see this disgusting piece that attempts to blame Fox News’ Sean Hannity for a man dying of the Wuhan virus.

In this garbage article, @GiniaNYT and the New York Times are blaming Hannity for a man's death because of a quote he made OVER A WEEK AFTER the man left on a cruise to Spain where he contracted the virus. pic.twitter.com/SQDxahzcVf

If you read the article, it attempts to draw a link between Hannity using the term “hoax” over the media’s Wuhan virus to a man’s death after he took a cruise to Spain. The problem? The man had already been on the cruise for nine days when Hannity made the comment. The timeline they are attempting to draw doesn’t even work.

Notice the very intentional sleight of hand in the above wording. They quote the man’s daughter, who is likely speaking in generalities herself, and then immediately cite Hannity as making the hoax comment in “early” March. They absence of an actual date allows them to make it appear that Hannity’s comment played a role here. It clearly didn’t.

Further, even if Hannity’s comment had been heard by this man before he went to Spain, there’s no logic to the idea that Fox News is somehow at fault for that decision being made. Hannity’s claim was targeting the media’s political machinations and the current situation within the United States. Nowhere does he say “everything’s good so you should go to a virus hot spot in Europe.” To infantilize people to such an extent is ludicrous. Worse, to do so while then attempting to blame another party for someone’s death is plainly disgusting.

You’ll also be less than shocked to learn that during this same time period, the Times itself pushed a story claiming it was safe to travel not just to Spain, but China itself. By their logic, they are now responsible for this man’s death.

The journos are using Fox News and conservatives as a scapegoat because they dont want to admit this was what THEY were telling people before this poor guy left for his cruise pic.twitter.com/fW8NftcOid

What’s currently occurring within the journalistic sphere concerning the Wuhan virus is incredibly dishonest and gross. Attempts to deflect from the failures that have occurred in their own backyards via their own Democrat politicians have led to now countless articles blaming everyone from Fox News to Florida. There’s a reason you aren’t seeing people rally around New York City right now. It’s not because people don’t care about their plight. It’s because the New York media and many New York residents on social media continue to spit in the faces of everyone else while ignoring that they have had the worst response to the virus by far.

The problem is not people going to the beach 1500 miles away or a pork processing plant in South Dakota. The problem is that their leaders screwed up. No amount of blaming Fox News or Republicans is going to change that. Every time they attempt to shift blame, they further isolate themselves.

In short, Hannity is not even close to responsible for this man’s death, nor is Fox News in more broad terms. Enough is enough with this awful attempt to play politics with something so serious.