Sanity Prevails in Alabama on Transgenderism 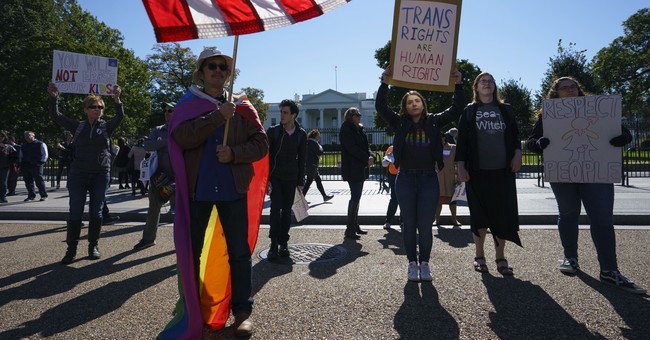 The National Center for Transgender Equality, NCTE, and the Human Rights Campaign gather on Pennsylvania Avenue in front of the White House in Washington, Monday, Oct. 22, 2018, for a #WontBeErased rally. (AP Photo/Carolyn Kaster)

While one can certainly hold all sorts of views on transgenderism and the issue of gender dysphoria, one of the more contentious debates has been how children fit into the equation. We’ve seen high profile cases, such as the one of James Younger, whose mother fought to be able to transition him into a “girl” via a contentious court battle.

As I wrote at the time, if conservatives can’t get behind preventing children from being abused in this way, then what exactly is the point of our movement? Just to lower taxes? Or to devolve into some jaded form of libertarianism where child abuse is allowed? I ask that with the minimal amount of snark necessary, because I get the battle between parental rights and the state. At the same time, conservatives have always generally agreed that preventing abuse of children is a legitimate pursuit for the government.

Now, a new law in Alabama looks to do just that.

With a vote of 22-3, the Alabama Senate passed a bill criminalizing the act of sex-related surgeries, prescribing opposite sex hormones, and drugs used to arrest puberty to gender-confused youth under the age of 19. https://t.co/ecKoIHyQyU

Following a successful committee vote last week, the state senate passed legislation criminalizing the act of prescribing opposite sex hormones and drugs used to arrest puberty to youth under the age of 19, AL.com reported. The bill is called the Vulnerable Child Compassion and Protection Act.

The sponsor of the bill went on to say this about the use of experimental drugs and procedures on children.

“I just don’t think and others don’t think that kids should be given experimental drugs or surgeries that could have irreversible consequences for the rest of their life,” Shelnutt said.

“Kids are not fully developed until later in life. I think we can all agree that kids aren’t capable of making certain decisions until certain ages. And so, we want to just stop these procedures from happening in Alabama.”

This is correct. Using kids as human Petri dishes to satisfy the woke wants of a certain segment of our adult society is not freedom. It’s abuse and it should be treated as such. We don’t allow a mother to give their child cocaine for obvious reasons. Giving kids hormone blockers and drugs that can chemically castrate them before they even reach the age of consent is just as insane.

The truth is, whether some on the progressive left want to admit it or not, that most kids grow out of their gender dysphoria. Even if they “think” they want to transition before they become an adult, they have no more ability to process the repercussions of that decision than they do any other decision we bar children from making until they reach adulthood.

Obviously, this is only a victory in one state, but this is a cultural battle worth fighting. Conservatives shouldn’t shy away from it out of fear of reprisal.