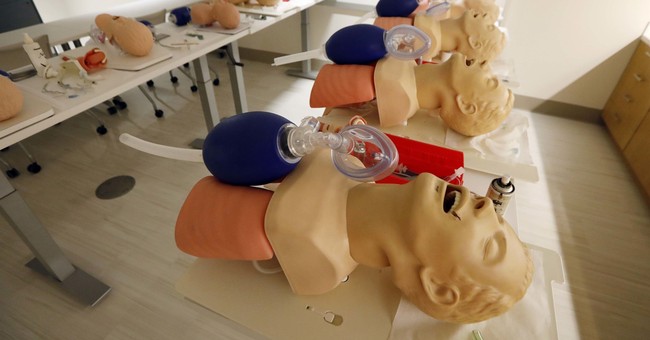 FILE – In this Friday, Aug. 4, 2017 file photo, mannequins are arranged to train CPR to incoming medical students in Jackson, Miss. A study released on Sunday, Nov. 12, 2017 shows women are less likely than men to get CPR from a bystander and more likely to die, and researchers think that reluctance to touch a woman’s chest may be one reason. (AP Photo/Rogelio V. Solis)

On Tuesday, the New York Post reported something horrific: The Empire State had issued a drastic guideline with regard to resuscitating citizens in dire medical need.

Amid an overload of coronavirus patients in hospital, emergency services were told not to attempt reviving anyone they find on scene without a pulse.

While paramedics were previously told to spend up to 20 minutes trying to revive people found in cardiac arrest, the change is “necessary during the COVID-19 response to protect the health and safety of EMS providers by limiting their exposure, conserve resources, and ensure optimal use of equipment to save the greatest number of lives,’’ according to a state Health Department memo issued last week.

Reportedly, “First responders were outraged over the move.”

Oren Barzilay, city union leader for the collective including uniformed paramedics and EMTs, put it succinctly:

“They’re not giving people a second chance to live anymore. Our job is to bring patients back to life. This guideline takes that away from us.”

This is absolute terror.

Earlier this month, the Regional Emergency Services Council of New York, which oversees the city’s ambulance service, issued a new guideline that said cardiac-arrest patients whose hearts can’t be restarted at the scene should no longer be taken to the hospital for further life-saving attempts.

The state Health Department defended the rule, insisting it had been employed “in many areas of the US as well as other locations throughout the world” — even before the coronavirus.

From a separate NYP piece:

State Health Commissioner Dr. Howard Zucker “rescinded” the “do-not-resuscitate” order put out by his Bureau of Emergency Medical Service on Wednesday — just hours after The Post exclusively reported on it.

Thank God for the press.

The Health Department released a statement:

This guidance, proposed by physician leaders of the EMS Regional Medical Control Systems and the State Advisory Council — in accordance with American Heart Association guidance and based on standards recommended by the American College of Emergency Physicians and adopted in multiple other states — was issued April 17, 2020 at the recommendation of the Bureau of Emergency Medical Services, and reflected nationally recognized minimum standards. However, they don’t reflect New York’s standards and for that reason DOH Commissioner Dr. Howard Zucker has ordered them to be rescinded.

The fire department had released a letter Friday — one day after the state’s recommendation. It said it would continue to revive those in need and that “the NYC 911 system will continue to maintain a higher level of care.”

Before the rescission, a veteran paramedic had explained to the Post that only three or four out of every 100 patients can be brought back to life via CPR.

Nevertheless, he observed the obvious, to which the state of New York — and every state — must adhere:

“For those three or four people, it’s a big deal.”

It’s everything. It’s life. And it’s worth no less during a viral pandemic.

We are losing a lot of things due to the virus and government’s oversight. But we can’t lose our freedom. And we can’t lose what our medical community, at its very essence, is meant to provide: Hope. Hope for another day, to live in what must remain the greatest country on earth.

Thanks to a Liberal Virus-Cited Program, a Convict Commits New Crimes 37 Minutes After His Early Release