From Balconies and Rooftops, the Big Apple Comes Together in Song - "New York, New York," by the Greatest Singer to Ever Perform It 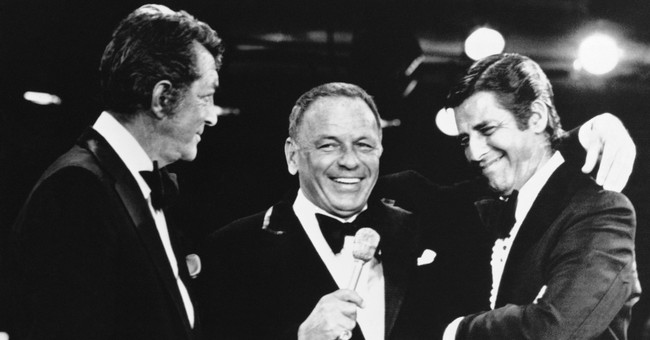 FILE – In a Sept. 6, 1976 file photo, Frank Sinatra, center, appearing as a performer on the annual Muscular Dystrophy telethon hosted by Jerry Lewis, right, brings on Dean Martin, Lewis old partner, to the surprise of Lewis, in Las Vegas. It was the first time Martin and Lewis had appeared together since their comedy team broke up 20 years before. Lewis, the comedian and director whose fundraising telethons became as famous as his hit movies, died Sunday, Aug. 20, 2017, in Las Vegas, according to his publicist. He was 91. (AP Photo, File)

How about some good cheer and solidarity with your fellow Americans?

On Thursday evening, a sing-along took place in the Big Apple.

Peace of Heart Choir — which believes in “the healing power of music” — had posted to Facebook an invitation to New Yorkers to join them in song — a rousing quarantined rendition of “New York, New York.”

Here’s how they laid it out :

Join us to create a city-wide sing-along which will hopefully bring hundreds (dare we hope for thousands?) of New Yorkers to their windows, terraces, and more to sing “New York, New York” after the clapping and cheering of “Clap Because We Care” on Thursday, April 16. We’ll be coordinated with a Facebook Live feed from our New York Sings Along Facebook page. All you need to truly do is open a window and head to the Facebook page, And be prepared to clap, cheer, then sing.

At 6:45, before the Clap begins, we’ll launch a Facebook Live feed from the New York Sings Along page. We’ll use the feed to synchronize participation in the sing-along at the end of the cheer.

If you’re wondering which version they played, how dare you — it was, of course, Ol’ Blue Eyes:

The announcement got shared 2,300 times.

At the time of this writing, a few clips online had begun to surface. Here are a few participants:

When other New Yorkers did their sing along to “New York, New York” tonight, @yantidjani & I danced on the rooftop of our apart, in honour of NY’s amazing health workers

We are in this together & we need to stay strong together.

In their advertisement for the event, Peace of Heart championed the power of music:

We believe in the healing power of music. We perform for free dozens of times each year in the city’s hospitals, nursing homes, shelters, and more. We’re hoping that singers from all across the city will join us for this new project. Just sing along out your open window when the track prompts you. Or sing from your, terrace, balcony, front yard or just in your living room. But do sing!

In a statement made to The Daily Wire, Peace of Heart said the event was the first-ever, 100% social-distanced, city-wide sing-along event” aimed to “to boost morale, honor New Yorkers on the front lines battling the COVID-19 pandemic, and allow more New Yorkers to experience the healing power of communal singing.”

As for the city’s front-line workers, if you weren’t aware, in late March, applause began across the metropolis at 7 p.m. nightly — residents clap, clang, applaud, and whistle to show their gratitude to doctors, nurses, and other medical staffers braving it amid the pandemic.

Now they can make a joyful noise in yet another way. Together. As a community, a city, a state, a nation.

In the FB Live video, a member of the Peace of Heart choir closed with this:

“That was amazing, everybody! … We hope you enjoyed singing with us today. Please join us next Thursday at 7, for another edition of New York Sings Along.”

What’s more American than this? Like most any family, we always come together in a crisis.