So You Can Fare Well: House Democrats Move to Give Every American $2,000 Per Month 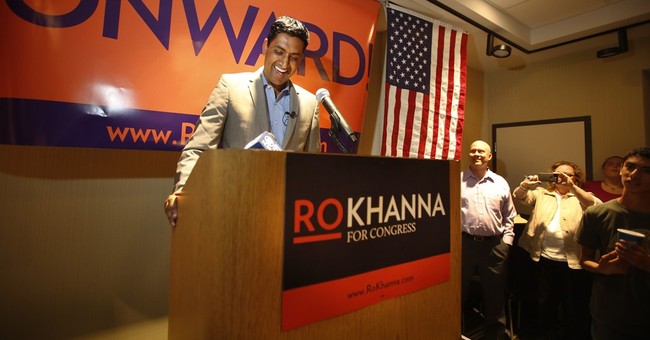 In this June 3, 2014 photo, Ro Khanna addresses his supporters at the Aloft Hotel in Cupertino, Calif. Khanna will challenge incumbent Rep. Mike Honda in the intraparty face-offs, a produce of the state’s new top-two primary system. California’s revamped primary system, approved by voters in 2010, allows the top two candidates regardless of political affiliation to advance to the general election. The idea is that it helps moderates because candidates have to appeal to a wider pool of voters. (AP Photo/Bay Area News Group, Patrick Tehan)

Boy, have House Democrats got a plan for you.

How’d you like to get $2K a month during the entirety of the pandemic?

The EMPA will throw 2000 bucks your way “until employment returns to pre-COVID-19 levels.”

Tim explained in a press release:

“The economic impact of this virus is unprecedented for our country. As millions of Americans file for unemployment week over week, we have to work quickly to patch the dam – and that means putting cash in the hands of hard-working families.”

I love it when the government puts cash in my hard-working hands.

Ro championed Democrats and Republicans joining forces to pay us all:

“A one-time, twelve hundred dollar check isn’t going to cut it. Americans need sustained cash infusions for the duration of this crisis in order to come out on the other side alive, healthy, and ready to get back to work. Members on both sides of the aisle are finally coming together around the idea of sending money out to people. Rep. Ryan and I are urging leadership to include this bill in the fourth COVID relief package to truly support the American working class.”

To be fair, the government absolutely does owe us all money. Unfortunately, any dollars they donate now will be taken from us later via taxes.

Sometimes, ya can’t win for losin’.

Then again, it would’ve been taken, regardless. Along with lots more.

Either way, under the bill — as reported by The Daily Wire — “more Americans would qualify for federal payments and the $2,000 monthly payment would stay in effect until employment returns to pre-COVID-19 levels.”

The eligibility requirements are as follows, courtesy of TDW:

Last month, of course, Congress and Trump approved $1,200 to go to each American who makes less than $75,000 a year. Above that income marker, the amount declines by 5% for every dollar, or 50 clams for every thousand extra earned.

How do ya like the two grand a month? $1,200 is fairly paltry for those who’ve been out of work, and more money is always more better.

Or are some congressional Democrats trying to put us all on welfare, even as Andrew Cuomo says the “worst is over” for the Big Apple?

And who decides when we’re back to “normal”? And what precedent are we setting? And might this be a reason to stall a natural restart of the economy? Where does the plan lead us?

Considering the source, it sounds like a sucker’s deal to me.

It’s on the House: Roughly 2 Million Americans Have Missed Their Mortgage Payments

Frenching Felon: A Lady’s Arrested for Contaminating Nearly $2K Worth of Store Items With Her Tongue

30 Good Things President Trump Has Done for America
Townhall
Bette Midler tries to dunk on SCOTUS, does an Islamophobia instead
Twitchy
Extremely Weird Detail About the Highland Park Shooter Revealed by Authorities
Redstate
Yes, Ukraine Has a Nazi Problem, and Its Name Is Andrej Melnyk
PJ Media