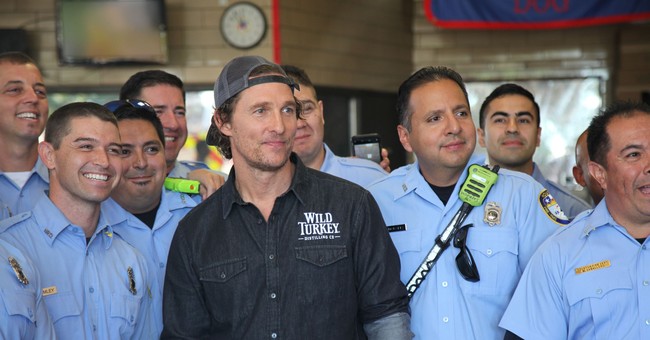 This Oct. 28, 2018 photo shows actor Matthew McConaughey posing with first responders in Houston as he surprised them with catered lunches. McConaughey said he wanted to celebrate National First Responder’s Day by giving thanks to the responders who risked their lives during Hurricane Harvey. (AP Photo/John Mone)

Personally, I like Matthew McConaughey. He appears to have felt the white hot glow of celebrity without having been overtaken by it.

The A-List star seems like a normal guy — he doesn’t champion radical political causes he knows nothing about, and he chooses to live somewhere other than Hollywood.

He also goes to church, and he’s spent substantial amounts of time living in a camper.

There's a reason why Matthew McConaughey is a big Nick Foles fan: He goes to church with his family. https://t.co/5vG1p7PHuG

So I like him already, but here’s a bonus.

Last weekend, Matthew served as caller for residents at The Enclave at Round Rock Senior Living facility in Texas.

He was the host…for their Bingo game.

Virtually, of course, due to the coronavirus.

McConaughey sat at a table, flanked by his wife Camila, his mother Kay, and his kids.

He’s also partaken in a public message or four, amid this very strange socially distance time.

The actor, a native of Uvalde, Texas, has appeared in various public service announcements encouraging Texans to abide by social distancing protocols. He appeared in a TV spot with Austin Mayor Steve Adler (D) and Travis County Judge Sarah Eckhardt (D) titled “Be A Lot Safer If You Did,” a play on his iconic line in Richard Linklater’s Dazed and Confused, and voiced a PSA pushed by Gov. Greg Abbott (R).

Here’s his own personal note to the people on March 17th, via Twitter:

I appreciate Matthew’s desire to provide something positive, which seems to be a pretty consistent thing with him. And unlike perhaps some other celebrity offerings, I don’t believe his is an exercise in narcissism.

The elderly residents at Round Rock seem to have appreciated it; they made “green light” signs as a way of thanking him for taking part:

One resident’s sign read, “Let’s turn a red light in to a green light,” while others’ sported quotes from the actor’s movies.

“I checked the list of people I trust and your name ain’t on it.” (Lincoln Lawyer)

More on Matthew and Camila’s charity:

So there’s ya a little insight into someone you see from time to time on the silver screen. On this COVID-19 Easter weekend.

And good for all those who took part in the game last week — there’s no reason why senior citizens shouldn’t be using the video conference app Zoom to kick some Bingo butt.

If only more of the rich and famous seemed as connected to normal life as Matthew. For some at the height of fame, it appears, they live the quarantined life all year ’round — tucked away from a little thing called America.