Is This Thing On? A Hollywood Star Praises Trump's Leadership: 'He's Involved' and 'Doing a Good Job' 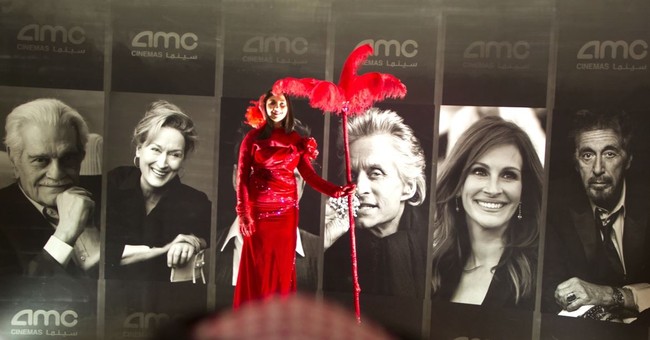 A visitor takes pictures for an actress with a red dress in front of posters of Hollywood movie stars during invitation-only screening, at the King Abdullah Financial District Theater, in Riyadh, Saudi Arabia, Wednesday, April 18, 2018. Saudi Arabia held a private screening of the Hollywood blockbuster “Black Panther” Wednesday, to herald the launch of movie theaters that are set to open to the public next month. (AP Photo/Amr Nabil)

You may have noticed that as soon as Donald Trump put an “R” next to his name, Hollywood largely ran out of good things to say about him.

But every now and then, from Tinseltown comes something surprising.

Such an occasion arrived Wednesday, from actor Dennis Quaid.

In Dennis’s view, the President’s doing a fantastic job, and we need to get behind the government as they take steps to fight the virus.

Speaking with The Daily Beast, the actor — who’s an independent — complimented Trump for initiating a travel ban early on, despite criticism.

He hailed the Commander-in-Chief for being “involved”:

“Well, to tell you the truth, I think the President is handling it in a good way. We see him on television every day, he’s involved, and the travel ban early on was a great idea — which he did in spite of protest about that. But I don’t want to get into the protest.”

Personally, I think Dennis is right about involvement: Trump’s daily briefings, in my opinion, have been critical as he leads the nation through this strange journey.

Dennis believes this crisis provides us a unique chance — for unity:

“I’m an independent—I’ve voted both ways throughout my life, swinging like a pendulum toward what the country needed at the time—and I think this might be an opportunity for the country to come together again.”

Crises can indeed do that:

“World War II did that for that generation, and this might be our defining moment of a generation. It’s going to be a different world, for sure, when all this is over, and hopefully we can all be a bit more unified.”

It happened after September 11th, too. Unfortunately, that didn’t last.

We’re past due for a revival.

During the interview, Quaid even said he thought Trump was right to send supplies to China in February — he was “trying to defeat the virus at its source at the time.”

The actor also praised Gov. Andrew Cuomo, who’s “doing a great job out there working for the people of his state.” Still, he asserted, New York dropped the ball in not purchasing “thousands of ventilators at a very good price like two years ago.”

Bottom line from the star — who was married to actress Meg Ryan for a decade:

“I think Trump, no matter what anybody thinks of him, is doing a good job at trying to get these states — and all of the American people — what they need, and also trying to hold our economy together and be prepared for when this is all over. I don’t want to get into petty arguments about it.”

But don’t think Dennis has no political criticism — he does. For Congress.

For hindering the President:

“But Trump did do the travel ban to China, and then to Europe very quickly afterward, and he was castigated by a lot of members of Congress, who were just getting out of the impeachment, that it was racist what he was doing. It’s a good thing we had that travel ban at the time.”

So how’s all this gonna turn out? Dennis is hopeful. Because it’s America.

The nation will get through it:

“You know, the world has never experienced this, and I don’t think it’s a time to be political. I think it’s just time to get behind our government and have everybody do what they can. If you want to point blame after, that’s another story, but right now I think we all just really need to come together on this. I do appreciate that Trump is giving the briefings and on television every day giving out the information, and I think they have great people handling it. Just one more thing outside of that: Despite presidents, Congress, and political parties, this is the United States of America, and we’re a very adaptable people in situations like this, and I think we’re all going to get through it. My heart goes out to everyone.”

And by the way — if you’ve never seen Dennis’s film Frequency, I highly recommend you do.

What We Desperately Need: Chris Pratt Launches a Production Company to Create Entertainment for ‘One Nation, Under God, Indivisible’

It’s Gotta Be Giving Democrats Fits: A Hollywood Actress Praises Trump for His Leadership and ‘Care’

A Hollywood Star Calls for America to Kick Trump Out of Office – Via a Coordinated, Total Economic Shutdown