Florida Joins a Small Group of States Allowing Worship Services Amid Stay-At-Home Orders. Are They Right? 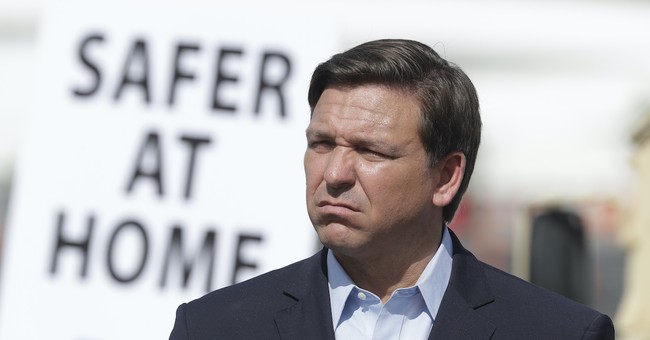 Florida Gov. Ron DeSantis listens during a news conference at a drive-through coronavirus testing site in front of Hard Rock Stadium, Monday, March 30, 2020, in Miami Gardens, Fla. Gov. Ron DeSantis doesn’t want the people on the Holland America’s Zandaam where four people died and others are sick to be treated in Florida, saying the state doesn’t have the capacity to treat outsiders as the coronavirus outbreak spreads. (AP Photo/Wilfredo Lee)

A lot of the world has shut down as of late, and that includes in-person church services. But Florida Gov. Ron DeSantis has taken a stand, and he’s not (yet) backing down.

Joining a small group of other states, the governor’s designated that — amid instruction for people to remain home — churches, synagogues, and mosques are indeed necessary. Therefore, gathering worshippers are free to continue.

On April 1st, Ron imposed a statewide stay-at-home order in effort to stop the spread of the coronavirus, excluding “essential” business and activity.

DeSantis made sure to cover church-goin’.

From Section 3 of the Order, “Essential Activities”:

For purposes of this Order and the conduct it limits, “essential activities” means and encompasses the following:

i. Attending religious services conducted in churches, synagogues and houses of worship; and

iii. Taking care of pets; and

iv. Caring for or otherwise assisting a loved one or friend.

The state’s seen at least one hump on the way to harassment-free congregated worship: As I covered on the 30th, a Hillsborough County pastor — Rodney Howard-Browne — was arrested and charged with unlawful assembly and violation of a public health emergency order after holding Sunday services.

At a press conference, state attorney Andrew Warren accused the minister of “hiding behind” the Constitution (isn’t that kind of the point of the Bill of Rights?):

“I think it’s unfortunate that the pastor here is hiding behind the First Amendment. One, it’s absolutely clear that emergency orders like this are constitutional and valid. Second of all, leaders from our faith-based community across this country have embraced the importance of social distancing.”

Indeed, not everyone’s equally as keen on coronaworship.

While dozens of states have refused to designate houses of worship as “essential,” New York City Mayor Bill de Blasio has been outright hostile to the faithful, namely Christians and Jews, threatening to close down their churches and synagogues permanently if they don’t obey his shutdown order.

Bill laid it out:

“So, I want to say to all those who are preparing the potential of religious services this weekend – if you go to your synagogue, if you go to your church and attempt to hold services after having been told so often not to, our enforcement agents will have no choice but to shut down those services.”

He took time to teach people about their religion:

“No faith tradition endorses anything that endangers the members of that faith. So, the NYPD, Fire Department, Buildings Department, and everyone has been instructed that if they see worship services going on, they will go to the officials of that congregation, they’ll inform them they need to stop the services and disperse.”

De Blasio even threatened to shut down churches entirely:

“If that does not happen, they will take additional action up to the point of fines and potentially closing the building permanently.”

But don’t imagine him too much of a grouch; amid the pandemic, he kept schools open even though staff had reported being COVID-19 positive, and in the name of health, he recently released hundreds of prisoners from Rikers Island.

Back to Florida and Gov. Ron, as reported by The Hill, Americans United for Separation of Church and State CEO Rachel Laser spoke out against in-person services during the crisis:

“We recognize that many people find solace in attending religious services, especially during uncertain times such as these, and thus share in the deep sorrow that the already challenging coronavirus situation also means temporarily halting in-person religious services. But when health experts and public officials determine that large gatherings must be cancelled for the public good, we must follow their lead and apply these guidelines to secular and religious gatherings equally.”

Such a notion’s come from, not only those perhaps unlikely to favor worship, but also Vice President — and devout Christian — Mike Pence.

Here’s what he told Nightline Wednesday, the same day as Florida’s order:

“We really believe this is a time when people should avoid gatherings of more than 10 people. And so, we continue to urge churches around America to heed to that.”

Well, that’s a bone to pick with Ron. As well as Michigan, New Mexico, Delaware, Ohio, Texas and West Virginia — all states allowing some religious exemption.

Given the circumstances, it seems to me that missing a few Sundays might not be a bad idea; and with the web, ministers can still deliver their messages.

What’s your take? Should churches be meeting? More importantly, should government forcibly stop them?

I look forward to hearing from you.

In Light of the Kennedy Center Layoffs, a Republican Congressman Introduces a Bill to Get Back Our $25 Million