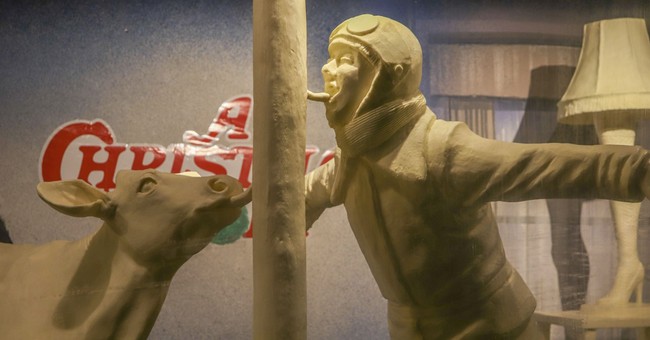 This Monday, July 16, 2018, photo provided by the American Dairy Association Mideast shows Ohio State Fair butter sculptures including this year’s sculptures marking the 35th anniversary of the 1983 movie “A Christmas Story,” such as the character Schwartz whose tongue becomes frozen to a flagpole and a “leg lamp,” right, as well as the display’s customary calf, left, in the Dairy Products Building at The Ohio Expo Center

If you’re ever on Family Feud and the category is “Things People Like to Lick,” I wouldn’t recommend going with “deodorant.”

Nonetheless, a man in Missouri’s tastebuds appear to have felt the need — the need for Speed Stick.

The 26-year-old (PhD candidate?) videoed himself lapping armpit items along the shelf.

Watch the (Stephen Hawking-trailing?) maverick do his thing (and beware the vulgar language):

Unfortunately, it so happens that the (Isaac Asimov-influenced?) taste-tester broke the law.

The City of Warrenton Police Department posted a statement to Facebook:

A local resident who took a video of themselves licking the merchandise after making a “Corona Virus” statement at Walmart and posting it to social media has been taken into custody. Charges will be pending through the Warren County Prosecuting Attorney’s Office.

This particular video, which won’t be shared here, has gained some international attention and we have received numerous reports about the video from locals, nearby residents, as well as people from the Netherlands, Ireland, and the United Kingdom. We take these complaints very seriously and would like to thank all of those who reported the video so the issue could be addressed.

The St. Louis Post-Dispatch reports that Cody was charged with a terrorist threat in the second degree.

And as it turns out, he’s had quite the lead-up to one day inventing teleportation:

“Public conduct that was immature on March 10 looks completely differently through the lens of today. Everything has changed at warp speed, but that should not work retroactively and convert a tasteless and impulsive act into a criminal terrorist threat.”

Cody Lee Pfister, 26, posted a video on social media of himself licking deodorants at a Warrenton Walmart. He's been charged with terrorist threats.

One social media user posted the slobbery slip-up with a hashtag that’s new to me: #Covidiots.

When it comes to our future with COVID19….we are DOOMED!

Cody’s not the only one getting in trouble for spreading spit in stores.

On Sunday, authorities charged 50-year-old George Falcone, of Freehold New Jersey, with a terrorist threat for allegedly telling a female Wegmans supermarket employee he had COVID-19 and intentionally coughing on her.

Falcone was told by the employee he was standing too close to her and to an open display of prepared foods, according to the Office of the Attorney General. He then allegedly “stepped forward to within 3 feet of her, leaned toward her, and purposely coughed.”

Falcone also allegedly laughed and said was infected with the coronavirus, authorities said, adding, “Falcone subsequently told two other employees they are lucky to have jobs.”

“There are knuckleheads out there. We see them and we are enforcing behavior.”

“We are up and down the state and we will not take any non-compliant behavior, never mind egregious behavior such as this.”

For George, the pressure to clean up his act may be off for a while; as pointed out by NBC News, he might not have to visit another supermarket any time soon:

Back to Cody, Business Insider indicates he may have to postpone patenting his design for the flying car:

In Missouri, making a terrorist threat in the second degree means ignoring the risk of “causing the evacuation, quarantine or closure of any portion of a building” and is a class E felony, which means it can be met with a prison sentence of up to four years and a fine.

In a world of COVID-19, covidiocy isn’t such a good idea.

Especially if you covideo it.