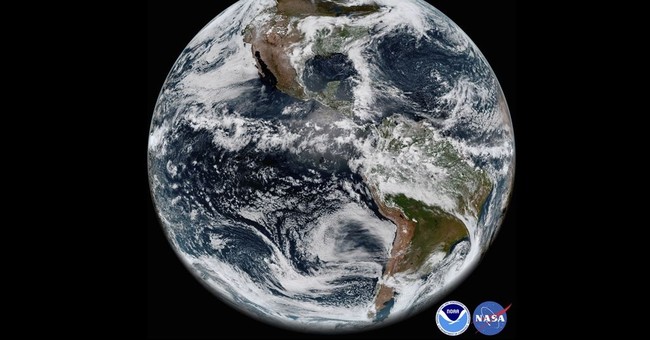 This image provided by NOAA/NASA on Thursday, May 31, 2018 shows the Earth’s western hemisphere at 12:00 p.m. EDT on May 20, 2018 made by the new GOES-17 satellite, using the Advanced Baseline Imager (ABI) instrument. The weather satellite observes Earth from about 22,300 miles above the surface. Despite a serious cooling problem, the newest U.S. weather satellite has produced sharp snapshot of Earth. On May 23, 2018, NOAA reported that critical infrared sensors in the satellite’s main instrument were not staying cold enough. (NOAA/NASA via AP)

I’ve marveled in the past at movies depicting major American cities without inhabitants, wondering how much work it took to create the effect.

But now we’re seeing that very thing, and there’s no sleight of hand required.

As noted by The Daily Wire, astounding photos of New York, Los Angeles, and Chicago are popping up on social media.

And it certainly looks as if there must be zombies on the lurk.

Whoever thought NYC could look so clean:

“Subway population at rush hour = two people and a cat.”

Photos of the day – Coronavirus scare

Reuters revealed what the train would look like if you were the only one riding:

And check out Times Square:

An empty Times Square is seen in New York City, and more photos of the day: https://t.co/RkbOZgbG5X 📷 Jeenah Moon pic.twitter.com/rTyWMn0Qqe

On to Chicago, the windy city has only the trees to catch the breeze:

It is, as pointed out by Kurt in Quarantine, “eerie”:

In Los Angeles, it looks as if the rapture took place:

Downtown Los Angeles is very surreal right now. Chinatown is abandoned. Grand Park is empty. It’s rare to even see people. Everybody come clean? Come on, you can tell me. Are we in a movie? pic.twitter.com/wIyDEuF07g

Well, maybe not the rapture, but something that would make people in LA disappear.

Has any Los Angeles highway ever been this empty? pic.twitter.com/5Npufjwyjp

All over the country, cities appear abandoned. Like modern-day ghost towns.

The images seem straight out of The Twilight Zone.

An empty Bourbon Street on a Friday night. pic.twitter.com/1RFBD2rq4t

And, of course, it isn’t just America:

London is so empty :’( pic.twitter.com/sdLnXTgOTr

For many, we’re living in a stressful time. And certainly, any virus that can cause death is to be treated with respect.

But putting that aside, I’m stunned by this unique moment in history — when the world slowed and everyone went home.

We’ll always remember it. We’ll tell our grandchildren about it.

We were alive when it happened. We remember how it looked.

And hopefully, during this time of quarantine, we can reflect inward. Remember what life is about. It isn’t the rat race. It isn’t what’s out there.

It’s what inside us. And it’s those with whom we share our hearts.

And as empty as the world looks right now, this can be a time when we discover what truly does — and should — fill our lives.

To you and yours — this Wednesday morning, March 25th, 2020 — Happy Zombie Apocalypse.

Billy Sings the Blues: A Polyamorous Lover Waxes on the Difficulties of Quarantine With His Girlfriend and Her Boyfriend