Coronavirus Makes History: In Lieu of a Layover, Passengers Get Treated(?) to the World's Longest Flight 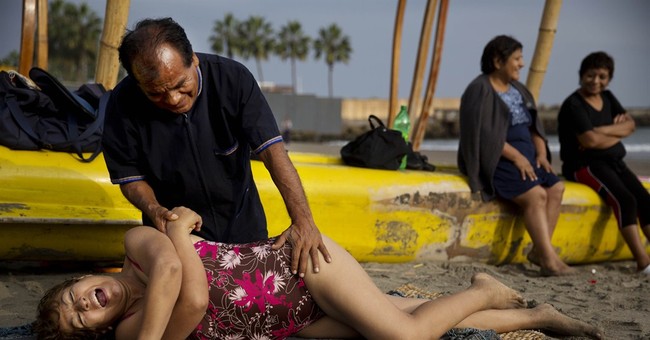 In this May 15, 2015 photo, chiropractor Felix Retamoso treats Virginia Espinoza’s lower back pain on Fishermen’s Beach, where she took a therapeutic swim in the Pacific Ocean in Lima, Peru. “He’s not only cheaper, but we’re outdoors in direct contact with nature,” said the 67-year-old. (AP Photo/Rodrigo Abd)

Amid shutdowns and alterations due to the Wuhan flu, some strange things are happening (for a supreme example, see this).

However, courtesy of U.S. travel restrictions, the plane hoofed it all the way from Papeete — the French Polynesian capital — to Paris.

It was a real backbreaker: The one-off flight lasted a chiropractically nightmarish 16 hours.

Furthermore (emphasis on “further”), as reported by the New York Post, the journey covered 9,534 miles of open sky — a literal aviation distance record for planned passenger flights (the longest in duration was 18:45).

And in case you’re wondering, the plane — which left Papeete on March 14th at 3 a.m. and landed at the Charles de Gaulle airport at 6:30 a.m. on March 15th — was a Boeing 787-9. That’s a twin engine Dreamliner, and it was staffed by four pilots and a “reinforced crew.”

According to CNN, the plane was “nowhere near full, which meant it was able to proceed the full stretch without refueling.”

Speaking of stretching, hopefully the extra space allowed passengers to lie down and/or change seats a time or 20.

In the end, everything went great, as per the airline:

Air Tahiti Nui says it was an “exceptional flight, operated in a special context,” and adds it demonstrates the airline’s commitment to keeping up transit links between France and the overseas territory.

“But is not destined to be perpetuated,” adds the spokesperson.

After the flight, the new plan was to stop over in Vancouver or Grande-Terre, Guadeloupe’s Pointe a Pitre in lieu of an LA landing.

But now Canada’s out, too — thanks to its travel ban.

For the moment, the world is changing in interesting ways, thanks to this chapter in global health.

Horribly, of course, some stricken with COVID-19 won’t make it through.

But with God’s blessings, as a country and a world — including you and all you love — like flight TN064, we’ll land safely on the other side.

Hilarious: A Man Has His Personalized Tag of 27 Years Revoked, But He’s Determined to Snatch It Back

He Ain’t Skeered: Bernie Presses On Because He Trounces Joe in Two Major Areas – and Trump’s a ‘Religious Bigot’