In Honor of CoronaPanic, an Arcade Replaces Its Claw Machine's Goodies With Nothing but White Gold 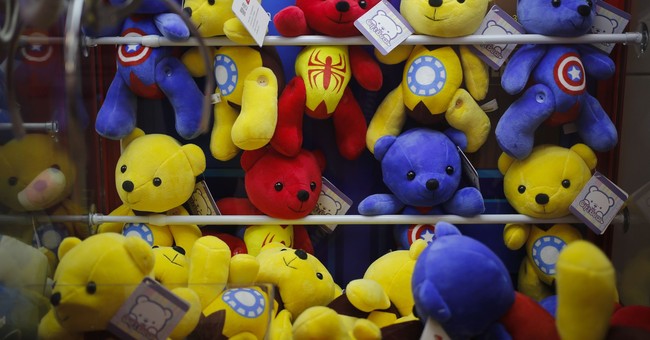 Chinese-made teddy bears carrying American hit movie Avengers characters are displayed inside an arcade game at a shopping mall in Beijing, Wednesday, July 11, 2018. China’s government has criticized the latest U.S. threat of a tariff hike as “totally unacceptable” and vowed to retaliate in their escalating trade war. The Commerce Ministry on Wednesday gave no details, but Beijing responded to last week’s U.S. tariff hike on $34 billion of imports from China by increasing its own duties on the same amount of American goods. (AP Photo/Andy Wong)

Can you work that claw machine at Chuck E. Cheese? I know a guy who beats it every time. God gave him a gift, and he’s not afraid to use it.

And the owner of Chapman’s Funland in Bridlington, East Yorkshire, is giving you a gift — if you can make it over to England and give the machine a shot.

In honor of the coronavirus, Eddy Chapman’s removed all those normal goodies from the gallery — presumably things such as stuffed animals, candy, a mini-basketball, and maybe a never-been-gotten XBox 360 — for something much more valuable.

Ed’s stocked the thing full of nothing but precious toilet paper.

As reported by The Independent:

He said he noticed shoppers “panic-buying” the product and decided to “have a bit of fun with it” in his…arcade.

Eddy’s not the only one: In Devon, England, another gaming owner’s filled his machine with TP and hand gel.

“We evicted the character from Frozen and the Peter Rabbit teddy bears and replaced them with hand sanitizer and toilet rolls.”

If you were wondering how to cause a run on toilet paper, by the way, just do this:

[P]ublic Health England urged members of the public to “plan ahead” in case they have to stay at home for several weeks to limit the spread of the virus.

There’s not a sane person around who hears “plan to be stuck home for several weeks” and doesn’t immediately think of that white fluffy companion to every happy person on earth.

And in the UK, they indeed could be sittin’ around the house for a while: At time of this writing, they’re at 1,551 cases. It may get worse before better.

Back to Eddy, people are loving his idea:

“Everybody that comes to it is laughing.”

One guy from Pontefract was actually able to claw himself some relief:

That made the 70-mile drive worth it:

“I am chuffed to bits. It were worth driving 68 miles and spending £30 to win that.”

Just so you know, “chuffed” means “delighted.” Not chafed.

In the UK, some items are certainly in short supply relative to the demand. In response, select supermarkets have said they’ll ration items such as hand gel and soap.

“There is absolutely no need for anybody to stockpile or anything like that.”

There may not be a need, but if you panic people, get ready for Lord of the Flies — and without toilet paper there’ll be a lot of those.

But if you can make it to Chapman’s Funland, take that claw and swat at white gold.

Like a Sock to the Eye: Makers of the Romper for Men Drop a Bomb on Your Frolicking Fancy

Standards Are the Enemy: A Parent Describes His ‘Emerging’ 2nd Grader’s Report Card. See If You Can Figure It Out