Tinseltown Tingle: They Weren't Thrilled by His Convictions, but Hollywood's Turning Cartwheels Over Harvey's Sentencing 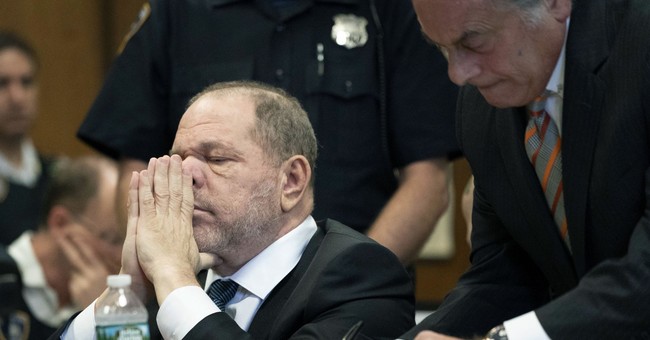 Harvey Weinstein, left, and his attorney Benjamin Brafman attend a hearing in New York, Thursday, Oct. 11, 2018. Manhattan’s district attorney dropped part of the criminal sexual assault case against Weinstein on Thursday after evidence emerged that cast doubt on the account one of his three accusers provided to the grand jury. (Steven Hirsch /New York Post via AP, Pool)

On Wednesday, Tinseltown jolted to the sentencing of a #MeToo supervillain.

As I covered previously, Hollywood heavyweight Harvey Weinstein was convicted on February 24th of criminal sexual assault and rape in the third degree.

The former Big Cheese was lookin’ at a minimum of five years and maximum of 25 for the criminal sexual act count. The rape conviction threatened a maximum of four.

Well, the numbers are in, and the 67-year-old’ll be doing a bit of the ol’ 23 skidoo — he’ll be leaving the uncertainty of his future, for the surety of 23 years housed in the hoosegow. Or at least two decades — as reported by The Daily Mail, he won’t be eligible for parole ’til 2040.

Cue the West Coast response, and it was certainly more ebullient than reaction to his convictions.

On Instagram, Megyn Kelly gave props to those who spoke out:

“To all the women who had that sickening feeling of having to choose between preserving their careers vs speaking out against their abuser, and who managed to find their voice, thank you. To those who chose otherwise, you’re loved & supported too. #Weinstein.”

To all the women who had that sickening feeling of having to choose between preserving their careers vs speaking out against their abuser, and who managed to find their voice, thank you. To those who chose otherwise, you’re loved & supported too. #Weinstein

Actress Mira Sorvino — one of Weinstein’s sexual harassment accusers — tweeted that she cried:

“23 years. Harvey Weinstein has been sentenced to 23 years in prison for his crimes of rape and sexual assault. I literally cried tears of amazement, gratitude that the justice system has worked on behalf of all of his victims today.”

23 years. Harvey Weinstein has been sentenced to 23 years in prison for his crimes of rape and sexual assault. I literally cried tears of amazement, gratitude that the justice system has worked on behalf of all of his victims today.

True Romance star Patricia Arquette swooped in to thank Mira for her bravery:

Thank you for your courage in His case.

Sister Rosanna chimed in, too:

Gratitude to all the silence breakers especially Rose and all survivors of weinstein to the brave women who testified and to the incredible investigative reporting of Ronan farrow who uncovered the sabotage and spying and to david Remnick thank you Rich McKuen and ny times.

As did Mia Farrow:

And to you dearest Rosanna 🎉💕

23 YEARS!! Justice has been served today. So thankful for all of the incredible survivors who shared their experiences at the hands of this monster. https://t.co/E6t1A5vc3X

23yrs!!! Convicted and Sentenced! Today the world shifted that much more for justice! May my dear friend Annabella Sciorra and all these brave women continue to heal and finally find some peace with this victory! #HarveyWeinsteinGuilty https://t.co/QI76zTmdIj

23 years is a long time to spend behind bars. I have to say, it’s a bit of a shock to me, given his clear power to luxuriously lawyer up.

Was the punishment befitting of the crime?

In the afterglow of their victory, it seems an appropriate question to ask: Did #MeToo put a stop to an old system? It certainly called out bad behavior, but it rose to such heights that the news cycle became a wave waiting to crash with trending turns.

Such is the way of things in a wold online. Of, perhaps, any world with news.

In my opinion, to whatever degree #MeToo will one day be viewed as an era, Harvey’s conviction definitely feels like a buttoning-up of things.

Until, at least, everything gets appealed.

But there will be no buttoning, if #TimesUp has anything to say about it.

The group released a statement in response.

The message was simple:

“This is only the beginning.”

The #SilenceBreakers will keep speaking truth to power. This is only the beginning. pic.twitter.com/abq1azViOk

Is it? What more is to come?

I do believe the movement changed Hollywood. And if the Land of the Beautiful People does revert back due to settled dust, I don’t think it will ever be quite the same.

Either way, whatever the state of the movie world may ever be, Harvey Weinstein won’t likely be a part of it.

What are your thoughts? Let us all know in the Comments section.