A Feminist Protestor Tries to Firebomb the Police, Ends Up Torching Her Fellow Rioter 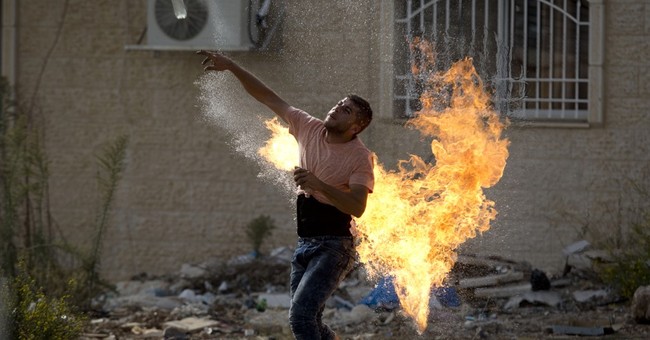 Palestinians throw molotov cocktail during clashes with Israeli troops near Ramallah, West Bank, Monday, Oct. 12, 2015. Recent days have seen a series of stabbing attacks in Israel and the West Bank that have wounded several Israelis. Past weeks have also seen violent demonstrations in the West Bank and Gaza, and at least 16 Palestinians have been killed by Israeli forces. (AP Photo/Majdi Mohammed)

It’s really not a good idea to play with fire.

Just ask a woman who was set ablaze in Mexico City over the weekend, while cops in riot gear braced for impact from ladies celebrating International Women’s Day.

How’d we get to a place where a party for the hens required roosters with face shields and batons?

Well, it’s about the general state of things to the south.

As per NBC News, on Sunday, 80,0000 hit the street to rage against the patriarchy.

Mexican pro abortion Feminists try to learn how to throw a bomb… without much success pic.twitter.com/PaEYqCBPvH

And there’s some solid reason for their discontent.

Here’s how the Peacock introduced it:

The high school student who lives in Naucalpan, northwest of Mexico City, was walking when two men started chasing after her. She desperately sprinted and was able to reach the safety of her home.

“I’m not free and I’m not happy and I’m not safe on the streets,” Perez told NBC News. She was [of the women] who marched in the country’s capital Sunday…against the spate of femicides and gender-based violence that has rocked the country.

According to The Associate Press, it’s grown to 10 a day:

Government data say 3,825 women met violent deaths last year, 7% more than in 2018. That works out to about 10 women slain each day in Mexico.

“In Mexico it’s like we’re in a state of war; we’re in a humanitarian crisis because of the quantity of women that have disappeared or been killed.”

But don’t misunderstand — there was more at issue Sunday than just violent crime.

A group of women outside Mexico City’s main cathedral clashed on Sunday with men protesting abortion who made Nazi salutes, among scuffles that left dozens injured during a protest of tens of thousands of people on International Women’s Day.

Wearing green bandanas symbolizing support for abortion rights, at least a dozen women ripped down banners describing abortion as femicide and set them on fire.

Was this the best way to effect change?

Elsewhere in the city center, women in black masks and armed with hammers smashed the windshield of a car, overturned a van and burnt doors of buildings.

One revolutionary among the pro-abortion set (as described by blue-checked tweeter Alejandro Bermudez) decided to really show ’em who’s boss.

Her method of choice: a firebomb.

She’d hurl it at the police.

As it turned out, the throw could’ve used a bit of toxic masculinity.

It fell short and exploded amid her own group.

And one unlucky of the likeminded ended up torched.

One Molotov cocktail reportedly set a female photographer from newspaper El Universal on fire, resulting in her hospitalization with second-degree burns, the newspaper said.

Hopefully, the flinger of flames leaned her lesson: It’s fine to be on fire over the issues. But leave the glass and combustible liquids at home.

Along with — perhaps — the hammers.

The ACLU Wishes Guys a Happy International Men’s Day – In Particular, ‘Men Who Get Their Periods’