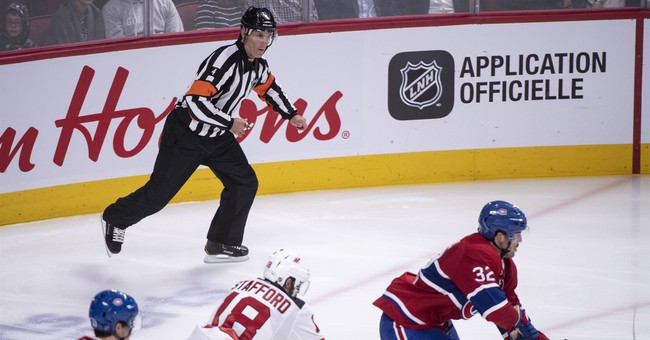 In this photo taken Sept. 17, 2018, referee Wes McCauley, top, keeps an eye on the play as the Montreal Canadiens face the New Jersey Devils during preseason NHL hockey game action in Montreal. An informal poll of NHL players leaves no doubt as to who the most popular referee is: Veteran McCauley. (Paul Chiasson/The Canadian Press via AP)

On Thursday, Chris Cuomo hilariously found himself the uncomfortable referee in a yelling match between co-chair for Bernie Sanders, Nina Turner, and Democratic strategist Hilary Rosen.

The two got into it over a quote from Martin Luther King and how it applies to “white moderates.”

To Nina, it seems, Martin was warning against Democrats like “moderate” Joe.

Hilary didn’t appreciate that, and she insisted Joe had fought for civil rights for black Americans.

The whole thing devolved into a real knee-slapper.

In response to Nina’s MLK reference, Hilary attempted a correction:

“[T]hat we should be concerned about white moderates — that’s actually not what Marin Luther King said.”

Best part: Chris’s Frankenstein face. He looks like maybe he’s imagining he’s taking a nap and trying to get some rest just from the thought.

Back to the conversation, cue some indignation from Team Bernie:

“He did say that. How are you gonna tell me about Dr. Martin Luther King, Jr? Are you kiddin’ me?”

“What he said is we should worry about the silence of white moderates. And what we have in Joe Biden is a man who is not silent.”

“[H]e has discussed that, over and over,” she said.

She also noted Bernie’s admission that he’d voted wrongly on guns in the past.

But Nina clearly wasn’t happy. She wanted to set the record straight:

“[W]hat Reverend Dr. Martin Luther King Jr. was talking about — he said, it is the point that the white moderate wants things to be comfortable, and instead of focusing in on, that the bigger threat is not necessarily the white KKK member, but more the white moderate that is more comfortable with keeping things the same or pretending that there is no tension, then to deal…”

“You know what? Don’t use Martin Luther King against Joe Biden. You don’t have that standing. I’m sorry. You don’t.”

The look on Chris’s face was fantastic.

“Don’t tell me what kind of standing I have as a black woman in America! How dare you?

Hilary tried to manage, “You have a lot of standing as a black woman in America. You don’t have the standing to attack Joe Biden using Martin Luther King’s words. That’s my point.”

But Nina didn’t wanna hear it from someone like Hilary:

“Listen — don’t dip into what I have to say about the Reverend Dr. Martin Luther King, Jr. How dare you, as a white woman, to
sit up here and try to tell me — no, no, try to tell me what I’m supposed to feel and what I’m doing right now.”

“Chris, I didn’t jump in on her, though. And then she wants to jump in on me.”

This is what the primaries are all about — people on the same side, hilariously punching each other.

Finally, Chris tried to retake the reins. And — wow — he was actually right:

“This is what you guys have to figure out: You’re in the same party. And let me tell you, you better keep that same energy when you’re up against Trump, that you have against each other. ‘Cause he is bigger and badder than I think you guys are ready for.”

The over-his-head host tried to wrap things up with love:

“But let’s agree on this about Dr. King: Only light can drive out darkness, only love can drive out hate. That is the challenge for the Democrats.”