Man's Boyfriend Refuses to Buy Him Weed, So He Stabs Him With a Samurai Sword 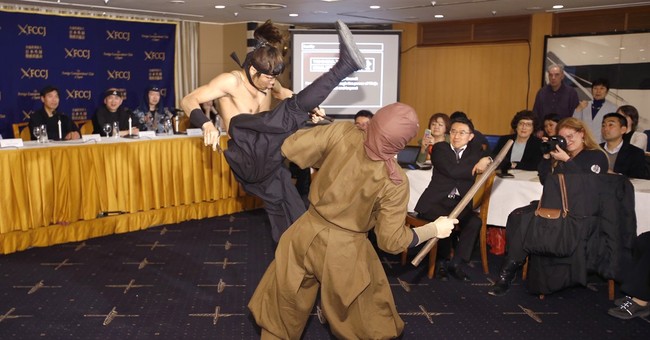 Members of Iga ninja group Ashura demonstrate a ninja-inspired martial-art during a press conference by the Japan Ninja Council at Foreign Correspondents’ Club of Japan in Tokyo, Wednesday, Feb. 22, 2017. The Japan Ninja Council, a government-backed organization of scholars, tourism groups and businesses, said that it’s starting a Ninja Academy to train people in the art of ninja, and building a new museum in Tokyo devoted to ninja, hooded samurai-era acrobatic spies, set to open in 2018. (AP Photo/Shizuo Kambayashi)

When you’re hanging with your violent, samurai-sword-owning boyfriend and he’s hankerin’ for a hunk o’ weed courtesy of you — and you don’t wanna buy — stop and think: Should you head on back to your place?

In Michigan, a Ypsilanti man was attacked by his male companion after not treating him to some ganja.

According to MLive, the imprudent lover was buddied up with 28-year-old Neil Patrick Wasinski when things took a turn for the significantly-worse.

Around noon on January 18th, cops were called to the man’s apartment where they found him smoking a cigarette while holding a bloody towel against his side.

The dude explained that he was Neil’s boyfriend of one-and-a-half years, and that — two days earlier — his significant other had attacked him with a samurai sword after he failed to buy him a bit of what Snoop Dogg calls “that sticky-icky.”

After the refusal, Neil allegedly punched him in the ribcage and gashed him with the 21-inch curved, single-edged weapon he kept in his home at the Arbor One Apartments.

After the sabering — and still wielding the bloody blade — Neil chased his 23-year-old penny-pinching partner into a parking lot.

Eventually, they each took refuge in their respective residences.

Following the police visit, the victim was hospitalized in critical condition, with multiple stab wounds to his arm and torso.

Officers swiftly visited with Neil and asked him outside, at which point he spat on one of them.

He was charged with assault with intent to murder, assault with a dangerous weapon, and assaulting or resisting police.

The intent to murder charge was dropped thanks to Neil’s plea of no contest.

Oh, and good news: the victim’s gonna be fine.

There’s one more point of interest, courtesy of MLive:

Wasinski, or Nalla as she is known, is listed as a male in court documents but referred to as she in police records. A call made to Wasinski’s attorney was not immediately returned.

Be careful who you date — for the moment, you’ve gotta fend for yourself. Until, that is, Democrats enact sword control.