Strange and Terrible: A Policeman Shoots to Death His Fellow Officer in a Game of Russian Roulette. Reportedly, He Claimed They Were 'in Love' 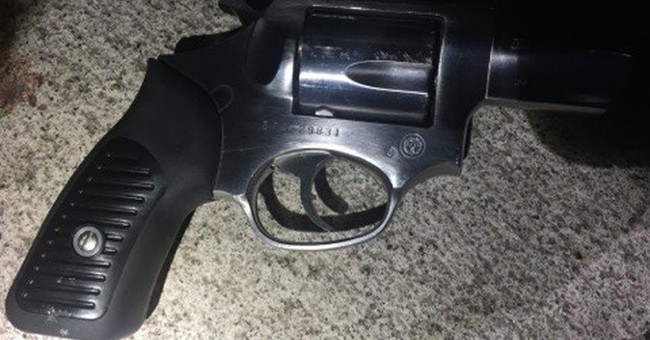 This image provided by the NYPD shows a gun recovered after a fatal shooting of an officer in the Bronx section of New York, Wednesday, July 5, 2017. Police said other officers shot and killed the suspect after he drew a revolver on them. (NYPD via AP)

Here’s a bizarre and terrible story.

Katlyn had been on the force for two years.

As reported by The New York Times, Nathaniel was on duty and at his apartment.

24-year-old Katlyn, who was off-duty at the time, had joined him in a game of Russian roulette.


According to the plea deal, Nathaniel put one bullet in a revolver and spun the cylinder.

For the first triggering, he aimed at the wall.

Katlyn took the firearm and pointed it at her fellow cop.

Nathaniel then returned the favor.

The bullet hit Katlyn in the chest.

She was pronounced dead shortly after arriving to the hospital.

Here’s another oddity, courtesy of CNN:

[A third] officer in the home told investigators he warned them not to play with guns, and was leaving when he heard the fatal shot, authorities said.

“The reckless behavior that took place that early morning has left an unfillable void for her grieving husband, her parents, and a host of loving family and friends. Although there is nothing that the law can do to restore the life of Officer Alix, it can make sure that the person responsible for her senseless death is held accountable for his careless behavior.”

It gets much stranger…

More from the prosecutor:

“Court documents stated that while at the hospital Hendren ‘spontaneously stated to his supervisor…that he did not try and kill the victim because he was in love with her and they were in an intimate relationship and were planning on moving into his apartment.'”

Previously, the exact relationship between Hendren and Alix had not been known, although the two sometimes patrolled south St. Louis as partners and were said to be friends.

The court document additionally states that Hendren, Alix and the only other officer who was present at the time of the shooting were “very close friends who had a close work and social relationship.”

And there’s chemical news that won’t stun you:

The St. Louis circuit attorney’s office has previously criticized police, saying they obstructed the investigation and there was probable cause that drugs or alcohol may have been a contributing factor. Police did not respond to CNN’s requests for comment at the time.

“We are aware of the rumors, innuendo, and salacious gossip surrounding the accidental death of Officer Katlyn Alix. There is no evidence, nor will there ever be, that this was anything more than a tragic accident.”

Finally, there’s another bit that’s very confusing: In all the material I read, I saw no indication of anyone spinning the cylinder after that first shot.

If — and that’s a big if — they in fact weren’t turning the cylinder and were simply alternating shots at one another after one dry-firing at the wall, then despite reports, they weren’t playing Russian roulette; they were essentially just killing each other. Or whoever got it first.

It all sounds mighty fishy.

Whatever the intricacies, it’s a good reminder that guns and alcohol don’t mix.

As designated by the plea deal, Nathaniel will serve 7 years for killing Katlyn and three years for armed criminal action.

I’m sure you all have a lot to say. I look forward to hearing from you — especially those of you who are law enforcement — in the Comments section.

A Woman Undergoes Surgery to Have a Penis Added, but Doctors Remove Her Vagina – Which She Didn’t Want Removed