'Shame on You!' CNN Contributor Attacks Black Trumpers: Dems Have 'Spent Their Careers Doing Things' for You 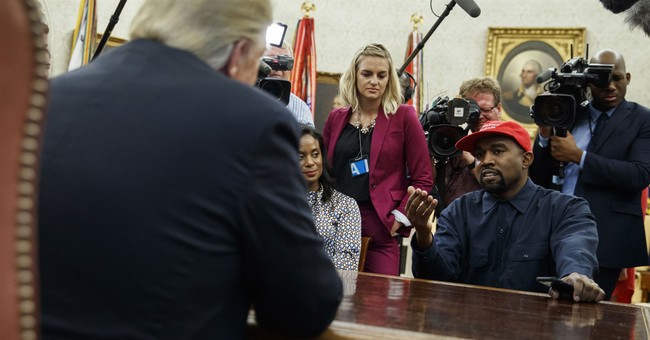 But over at CNN the day before, they had their own thing going on.

Network commentator Angela Rye told black fans of The Donald they should be downright ashamed of themselves.

The way she sees it, it seems, the President throws black people crumbs, while Democrats have been providing a feast for years:

“[Y]ou want to give Donald Trump kudos for throwing Cheez-It bits at you, and then criticize the people who have spent their careers doing things for the betterment of black people and black society. And I would just say at that point if you still go over to Donald Trump after that: Shame on you. Period.”

Meanwhile, the Commander-in-Chief has launched an initiative to connect further with black Americans.

As pointed out by host Don Lemon, Trump campaign senior advisor Katrina Pierson had called the outreach “a woke concept.”

Hoodies bearing the slogan “WOKE” were on display for sale in the mock community center.

When asked about it, Angela served up a slumber-centric zinger:

“I think that I’m ‘sleep.’ And I think that the good news is that a number of us have kind of stopped saying ‘woke,’ so welcome to the party, y’all. But now we’re asleep on that.”

The CEO of political advocacy firm IMPACT Strategies asserted that black voters need to take a look “in the mirror” and ask themselves if they wanna support folks like Katrina:

To Angela, when it comes to helping black people, Trump stinks:

“Donald Trump does not have a tremendous record to stand on as it relates to criminal justice reform. He has one bill passed. And a strategy that has not served black and brown people for years from before his election, right?”

She also claimed the President has a weak record with regard to black unemployment:

Black Americans have a true champion in @realDonaldTrump.

Since Pres. Trump was elected, 1.4 MILLION new jobs have been created for black Americans.

Black unemployment has been at or below 7% for 24 consecutive months—prior to Pres. Trump, it NEVER went below 7%.#DemDebate

Translation: @realDonaldTrump has delivered the lowest black unemployment rate in history, so Clyburn and the do-nothing Democrats are panicking because they’ve been exposed. https://t.co/rSIUW1VlRB

Trump has a Secret Ally–Black Voters!
Democrats are SCARED to death of Trump.They falsely call him a racist.

I guess she was referring to this, as relayed by everyone’s favorite ex-prez, “Ronald ‘Racist’ Reagan (666)”:

Obama had BLACK UNEMPLOYMENT at double digits for 6 years and hardly ever even mentioned it.
It wasnt on his priority list. Obama had other stuff to do like LGBTQ policy.

Back to Katrina, she responded to Angela online:

“When people get too far out of line – the Overseers are usually replaced by the Divers. Democrats are losing control of the black vote – so expect more of this crazy. @BlackVoices4DJT is here because @realDonaldTrump is #winning 4 us”

When people get too far out of line – the Overseers are usually replaced by the Divers.

Democrats are losing control of the black vote – so expect more of this crazy.

The political landscape is definitely changing — word on the street is, Democrats used to assume they’d get the vote of black Americans just ’cause.

But, as has been pointed out many times before, black people are not a monolith.

And, it appears to me, though we’re certainly still neck-deep in partisanship (impeachment, anyone?), things are less rigid — or, dare I say, black and white — than before. All bets are off, and people are switching sides like salmon leaping through the air in an upstream effort of unpredicted affiliation. Heck, the Democratic Party appears to be breaking up from itself — we’ve got overt socialists rising up from the D(eep).

What about the B — the black American citizenry? Will they give Trump a giant thumbs-up this time around?

Tim Scott’s made his wager, too:

What’s your money on?

In America’s Most Conservative State, Homeschooling Parents May Soon Have to Follow Government-Mandated Curriculum