On Sunday night, the entertainment industry reminded us that they do not know we’re here.

For them, conservatives are like werewolves — they know what the word means; they just don’t believe such things actually exists.

So why should they worry about what you think?

At the Tonys, those living in a left-wing bubble looked on with adoration as Robert De Niro took the stage.

He wasted no time on niceties. His first words into the mic were bleeped in delayed markets. In others, viewers got the full message:

The actor then made a muscle man pose.

The crowd exploded with glee.

Let’s, for a moment, close our eyes and imagine the response of the crowd if he — or any actor — had yelled, “F*** Obama.”

Hey — wake up! I’m not done writing the article yet.

But back to reality —

De Niro made yet another muscle man pose. A sure feat of strength: shouting an obscenity at the President of the United States — who was voted into office by the citizenry, who comprise domestic film and television audiences, by a film and (sometimes) television actor — in a room virtually exclusively filled with people who radically agree.

The crowd was lit up!

A sea of supercharged smiles. One guy seemed to mouth either “Wow!” or “Oh, yeah!”

Well, there was one lady who wasn’t smiling:

Otherwise, nothing but teeth.

Now, back to Obama:

The crowd lost their minds.

Once more, this time extended; it’s a must-see:

The camera found actor John Leguizamo, who was motioning as if he was part of the “dog pound” on The Arsenio Hall Show:

The audience remained on its feet.

And why wouldn’t they? You don’t exist. Or if you do, they’ll never know. You’ll still go see their movies. And plays. And shows. You’ll still support their work.

I did, Sunday afternoon — I watched Goodfellas — something De Niro wanted to show us he is not one of. Not to us, at least. Not to you. Not if you support the President.

For the most part, Hollywood and the coastal elites in entertainment have no concern for you. No respect for you. What you, and I, do…is line their pockets either way.

So why should they hesitate?

“Even more important in these perilous times, you rock the vote. Always fighting for, in your own words, truth, transparency, integrity in government. Boy, do we need that now.”

About De Niro, backstage, playwright and Pulitzer Prize winner (for Angels in America: A Gay Fantasia on National Themes) Tony Kusher said, “Good for him. I mean, it’s Robert De Niro. Who’s gonna argue with him?”

Kushner called the election of Donald Trump “the Hitler mistake” which placed a “borderline psychotic narcissist in the White House.”

Narcissim: a quality not found in the theatre.

Sound off in the Comments section; I want to know your thoughts.

For a more upbeat entertainment article, check out my piece on Margot Kidder and Superman.

For all of my stories, please visit my Author page.

And for those interested in watching the complete uncensored version of De Niro’s comments, push Play below: 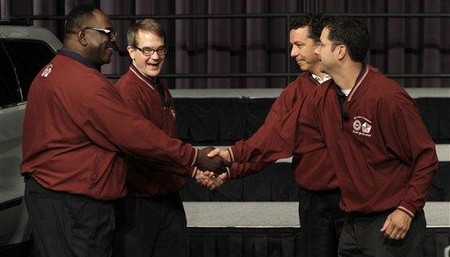 Here's Why Democrats Are Optimistic About Their Latest Gun-Grabbing Scheme
Townhall
Blue-check gets WAY more than he asks for with poll and follow-up thread advocating to REPEAL the Second Amendment
Twitchy
CBS News Finds out Something About Beto’s Stunt That Makes It so Much Worse
Redstate
EXPOSED: Amber Heard's Terrible, Awful, No Good Day in Court That Revealed 5 More Lies
PJ Media