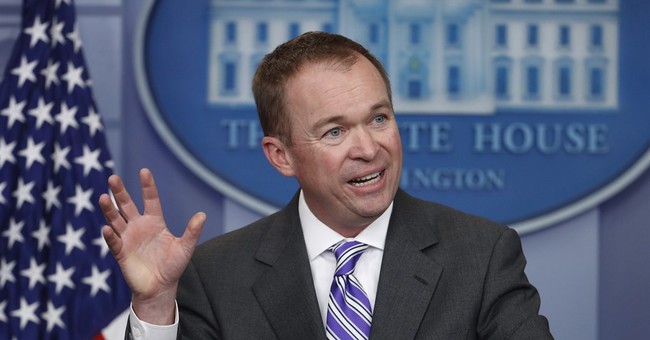 FILE – In a Monday, Feb. 27, 2017 photo, director of the White House Office of Management and Budget Mick Mulvaney speaks to reporters during a daily press briefing at the White House in Washington. (AP Photo/Manuel Balce Ceneta, File)

The Congressional Budget Office dropped their damaging analysis of Obamacare Lite the American Health Care Act on Monday, and the big number, the big headline tearing across websites, newspapers, Facebook pages, and the evening news is not good. “14 million would lose coverage next year under Republican health plan.” That’s not a good headline. Or a good thing.

The GOP is firing back, with Newt Gingrich going so far as to say the CBO should just be flat out done away with. But anyone who has been listening the last 5 days or so knows that this report was expected to be bad, it was expected to show huge numbers of people who will no longer be insured, and the prep and groundwork have been about how to explain that, not to call it a lie.

Before I go on, I just want to note a few things for the record:

1) When you make something that was mandatory no longer mandatory, people who were participating against their preference will exercise their preference. In other words, given the choice to opt-out, some will. That’s just a plain fact of humanity. It’s also something the CBO acknowledges in the report. “Most of that increase [in numbers of uninsured next year] would stem from repealing the penalties associated with the individual mandate.” It would not, though, account for the total 24 million fewer insured over the next ten years.

2) The Dems are piously bowing before the CBO now, as they were back when it first scored Obamacare. But when the CBO projected big time job losses as a result of the ACA, Dems turned on it immediately and the White House said their projection was not supported by facts and “belied” by their own findings. Just a reminder that politicians will inevitably turn on someone who rates them unfavorably, even if it is minor.

3) The CBO says the AHCA will reduce deficits. It also said that about Obamacare.

4) When you do something half-assed, you get half-assed returns on it.

With all that said, this is not good. The public will is for more Americans to be insured. And of course, that’s a good thing. It’s good when more people have health insurance and access to healthcare than when fewer people do. But it also leaves us with the question, “what is the point of all this?”

If we are going to get a bill that doesn’t repeal Obamacare, isn’t market-based, isn’t conservative, and in the end, leaves 24 million more people without coverage than the existing non-market-based, non-conservative plan … why bother? As Jay pointed out yesterday when the news broke, the first and most important question the GOP has to answer is “how is your plan better when 14 million people will lose their coverage?”

They want that trophy, but they aren’t willing, for whatever reason, to do the actual repeal. They’re going part way, and offering a promise of more later in the form of the “phases” yet to come.

It’s a complex bill, despite the relative smaller size of the language compared to Obamacare. Here are two excellent primers. Phil Klein has 5 takeaways from the CBO report here, including what will happen with premiums, and Reason offers this detailed analysis of the differences between what is, and what will be.

But the bottom line is that the GOP is now in a situation where they’ve failed to make the case for their plan, failed to sell conservatives on it, and have a razor thin margin of error for getting it through the Senate in reconciliation. Despite years of time to prepare, a sweeping victory in November predicated largely on the promise of repeal, and total majority rule, they still have a crappy bill that resounds with the echoes of Obamacare and which, even so, only has a thin chance of coming through, and we’re all supposed to be on board because they are going to give us “phase two” and “phase three” later on.

That, friends, is what you call a mess. Nice job, guys.