I’m sure we’ve all heard the news of The Great Betrayal by now. We’re looking at you Arlen Specter. And those two Canadian chicks…Maine 1 and Maine 2.  But back to this Benedict Arlen fellow now. We should’ve been able to see it in his face that he would be a deciever in one of the darkest hours. After all, he’s not even one of us. “Oh gracious, what could he mean!?” You know what I mean. Arlen Specter is playing for the other team. He’s a wolf in sheep’s clothing. He’ll buy you a rose and then poke you with thorns.

Arlen Specter is…  an alien*: 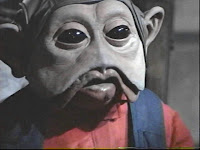 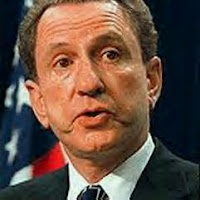 Notice how the cheeks have more layers than my mother’s lasagna. The robust ears. The fish-lips all nice and puckered up, ready to kiss your baby with the stamp of dishonor and ready to shake your hand with Captain’s hook waiting for you to turn so he can STAB YOU IN THE BACK!

The board calls for Arlen Specter to switch to the Democrat Party or become part of L. Calrissian’s fascist Alliance military party. The choice is yours, Arlen.

No, I don’t know if the SoroSuub Corporation is behind this or why they would be.  Could it be the Trade Federation?  Or, heaven forbid, a sect of the Galactic Senate?  We all know the alien bureacrats are some of the most heinous.

God help us all. 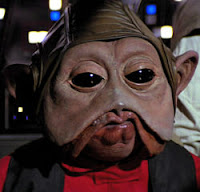 Here the lasagna-cheeks are not as prevelent in our friend Arlen. He may have been using some sort of aging cream at this time. We’re not sure. Or maybe his E.T. body secretes it’s own sort of moist cakey substance that provides a small camouflage. Again, we’re not sure. 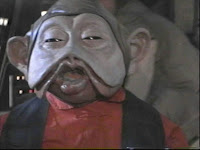 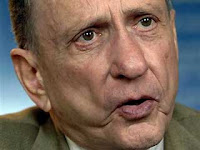 Here you can really see it.  Lasagna-cheeks in full force.  You can see in both photographs that the great amount of passion both are showing reflects in the eyes.  Now, normally I would have expected to see Arlen’s ears to protrude horizontally in a time of great passion; as in Exhibit B-1, but his do not.  He has fooled a wide number of colleagues this way. 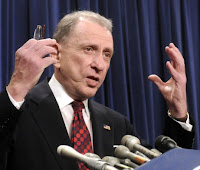 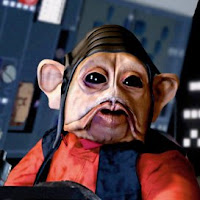 This is a different photo because of the obvious aging of our Nien Nunb friend.  I cannot tell if this is Arlen Specter circa 1965 or Arlen Specter circa 2009.  There is greyness all around him.  Arlen must have found a way to prevent the excessive eye-bagginess as seen in Exhibit C-2(which coincides with aging E.T.s).  Again, though his colleagues suffer from over-consumption of make-up products he has no such need.  Well Arlen, you could get rid of the eye-bagginess, but not the lasagna cheeks.  And that’s how we caught you.  That and your vote on the Porkulus.

Why, Nien Nunb, why?!  Not even the great General Ackbar was safe from your tretchery.  Now your bloodlines have spilled their way into the U.S. Senate.  It’s only a matter of time before the Inter-Planetary Revolution: perhaps in 2012?…