PRINCETON, NJ — Congress’ job approval rating has dropped five percentage points over the past month, from 19% in June to 14% in July, making the current reading the lowest congressional job approval rating in the 34-year Gallup Poll history of asking the question. The previous low was 18%, last reached in May.

What are those clueless clowns doing these days?

Across the aisle, a ballad to Kennedy, GOP’s Hatch pens tribute

But his latest trip down Tin Pan Alley had an even more personal resonance: Hatch said he was asked by several colleagues to put down his feelings about a very close friend who is facing a serious illness. The friend is the legendary liberal Ted Kennedy, and the colleagues are Democrats who envision having the song played as a tribute to Kennedy at next month’s Democratic convention – and as a living example of a brotherhood that transcends party lines.

The result, “Headed Home,” is a lilting ballad that even its author can’t repeat without tearing up. The lyrics, he said, refer to Kennedy’s heroic return to the Senate where Kennedy has served for almost 46 years and Hatch for 32.) Sailing home, sailing home. America, America, we’re headed home at last 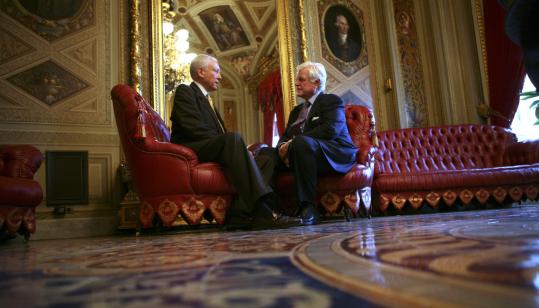 And despite the unorthodox notion of a Republican senator’s song being played at the Democratic convention, colleagues said they were very moved at Hatch’s effort.

“It’s a wonderful thing,” Senator John F. Kerry, the junior Democratic senator from Massachusetts, said when told of Hatch’s composition. “I think it’s entirely appropriate” to play it at the convention, Kerry said, because it would send a message of unity.

Can we get rid of all of them? Please.