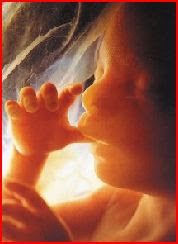 Ruth Marcus, writing in the Washington Post, opines that Sarah Palin made “an eloquent case for choice” during her speech at the annual banquet of Vanderburgh County Right to Life. Below is the comment I left in response to her claim.

If you were writing in the 17th century, I would certainly understand why you might be uncertain about when human life begins. There is no excuse anymore for anyone to say we don’t know. Technology and science show us the answer. It’s obvious when human life begins. Dear lady, this is the 21st century and we have known the answer to this question for many many years.

Women experiencing unintended pregnancies necessarly experience a struggle, but the main reason for this struggle is not because she wants to kill. It is for other reasons that she feels trapped — money, lack of family support, stigma, or perhaps a cancerous uterus can require intervention. Many things can enter into the equation that will make a woman do the unthinkable, but the desire to kill another human being isn’t one of those reasons.

Abortion is proof that society has failed women. What reasons did Palin give for considering abortion? Certainly the desire to kill another person wasn’t among them. No, it was what so many other women feel — a lack of support — a feeling of being forced to do something she really didn’t want to do. That is a failure not on Palin’s part or any other woman’s part who considers abortion. It’s a failure of society to support women who are faced with unintended pregnancy.

So what happens to these women? They decide, based on how much suffering they are willing to endure, whether or not to let this child live. (FYI: In the case of the cancerous uterus, it is morally permissible to remove the uterus to save the woman, even if the child dies, provided that there is no intent to kill involved. That is indirect killing, not direct murder.) How many women intentionally get pregnant for the reason that they want to have an abortion and kill the child? None. There is always another motive besides killing involved in the decision. No woman desires to kill……..but in the 21st century, we all know, because science now proves it, that it really is killing.

So, the woman who can’t bear the pressure goes to have her child killed. Society has failed her. She does the unthinkable because she feels trapped into doing so.

I have counseled many women considering abortion via a lay ministry of the Catholic Church. They all wanted life for their children but were nagged by what our culture tells them about abortion and adoption. Adoption, they would tell me, is “cruel”. Society has told them this. In the end, when they understood that now there is open adoption available and when they understood that the Church stood ready to assist them whether they chose to make an adoption plan or to parent the child themselves, every woman I counseled decided against abortion……..and were utterly renewed in rejoicing for doing so.

We all know it’s killing. We’ve known for years. We tell women all sorts of things to make them want to choose killing. We fail them when we do this.

If we can reverse Dred Scott, which classified slaves as non-persons, and evolve in a relatively short amount of time, given the entire history of mankind, to elect an African-American as President of the United States, we can end abortion and empower women.

Sarah Palin is hated because she proves that women can be mothers of disabled children and governors at the same time. So, she considered abortion for, as she said, “a fleeting moment”. People of character are often tempted to do wrong things when their backs are against the wall. The point is, she decided to love not only the child enough to go ahead with the pregnancy, but also to have enough faith in herself to be a hero and do the thing she knew to be right……and women can be heroes no matter what our culture tells them they can’t do.

The “moral” of this story, then, is not that temptation proves we must legalize wrong things. The moral is that women can be heroes and do the right thing even if the law allows them to do the unthinkable.

Many blessings to you.

““““““““““““`
Book Recommendation:
Why Can’t We Love Them Both : Questions and Answers About Abortion