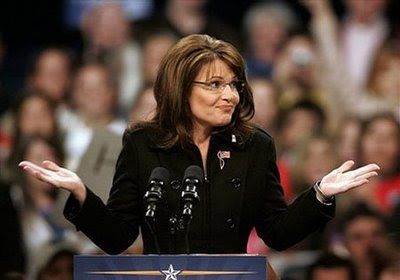 Yet another outrageously frivolous “ethics complaint” has been filed against Governor Sarah Palin — baseless, as usual. Conservatives4Palin has the full story. Please do read it because knowledge of truth is power.

You know, when I get a lot of liberal hate mail, I know I’m doing my job. Governor Palin, congratulations on generating the most outrageous outflux of hatred from liberals since the Reagan era. You are far more of a threat to them than I could ever be and I salute you for it.

I saw a poll (I think it was today, but maybe yesterday) at MIXX regarding Governor Palin. It asked, simply, “Would you consider voting for Sarah Palin for President in 2012?” Over 1,300 people had voted and more than 70% voted YES. Polls like this are the reason for liberal venom. Most of it should be ignored but the frivolous ethics complaints waste the time of government workers who have to handle them, thereby wasting taxpayer dollars, and are financially detrimental to Governor Palin who must pay out of her own pocket to defend against them. I think (talking only from my gut) that there should be a penalty for filing what a judge deems after-the-fact to have been a frivolous complaint, but I’m not familiar with the law on things like that. When the people of a state are filing complaints about their governor speaking in another state, you know they’re desperately pursuing an unhealthy agenda of some kind.

I must say, I have had to file official complaints with my state government (albeit not against the government itself) for denial of access to my service dog. When I am out driving and have to go to the bathroom urgently, if I stop at some public place and find that my wheelchair won’t fit in the bathroom stall, I just leave. I don’t sue for millions of dollars under the Americans with Disabilities Act. If anything, I write a letter to the place of business and let them know they really should get that fixed, but usually I just ignore it and go about my business. Life is hard and I have no desire to become a professional whiner. If a denial of access is egregious, I file a formal complaint. I’ve done it about five times, I think. The state enforcement officer contacts the business, we all discuss it and resolve it like adults. Recently, a person with a service dog was denied access in an identical manner to me, but that person sued through the ADA and got $100,000. Some people are whiners, and trust me when I say that in my sixteen years of political activity, I have found out that liberals are the chief whiners of the nation. There is even a website dedicated to liberal whining.

Sooner or later these people are going to realize the constant whining and attacking is not working. The fact that many ostensibly “popular” mainstream news shows are suffering big ratings drops is an indicator that the tide is turning.

There are a few (precious few) liberals in media who still have certain standards they are willing to fight for. Eileen O’Conner has acted in a professional manner regarding Susan Roesgen’s behavior at CNN. Tommy Christopher understands that Sarah Palin is not being allowed to play on a level playing field. He first spoke out on this when he called out liberal bloggers for viciously attacking her family and more recently by criticizing Newt Gingrich for not mentioning her in a list of viable candidates for 2012. Sophia Nelson has called for less whining from liberals and mentioned the trashing of Palin in subsequent comments to her readers. There are a few liberals out there, in other words, who have earned our respect. Many more are so far out there in Whineyville that intellectual and respectful discourse is, by every indication, impossible.

Allow me to elaborate on the seemingly hopeless ones. Do you know there are multiple blogs and Twitter users dedicated specifically to destroying the reputation of Governor Sarah Palin? In “Kentucky-eeze” we say “folks like that are just ate up”.

“Ate up”: crazy, obsessed and/or completely outperformed in a contest.

The first time I stumbled accidentally upon an anti-Palin blog was after reviewing my stats to see which sites were linking to me. I noticed I was getting a lot of visitors from one site in particular that I had never heard of (and it will continue to remain nameless since I am not in the business of reputation destruction). I clicked the link and got my first look at a genuine, full-fledged, Palin-bashing blog.

The blog in question had linked to a poll we had published regarding Sarah Palin. I was surprised to find that there were many visitors to this anti-Palin blog. Palin-bashers are almost always women and this place was full of them. Women were commenting with glee about the crucifixion of Sarah Palin, the frivolous ethics complaints (which they don’t recognize as frivolous, of course), the trashing of her reputation by her former future son-in-law, etc. Lots of women were posting daily and frequently there about how awful they think Sarah Palin is. Simply put, Sarah Palin can do NOTHING right in their eyes.

At first I was shocked, then disgusted, then angry……..and then I just burst out laughing as I recalled how I’ve heard some men talk about women sitting around talking and how the men sometimes compare them to hens cackling with each other in the barnyard. What that analogy means (I know because I have five brothers and no sisters, so I know “man things”) is that female banter, at least to the male brain, almost always seems as utterly pointless and fruitless as the cackling of chickens. Men just totally “zone out” and don’t “get it”. When I saw this pointless, fruitless banter, I immediately envisioned a barnyard full of chickens and I couldn’t keep myself from laughing.

I posted a comment. I couldn’t help myself. I told them that when I am finished with my work online every day, I am able to discuss my work with my children. I asked, “Can you do that?” I never saw my comment posted. Maybe it was. I didn’t stick around long enough to find out. These poor women don’t get that a person they despise is, without lifting a single finger and without the tiniest intention to do so, controlling them. Simply by being who she is, the person they love to hate, Sarah Palin controls their lives without even intending to. How ironic that they spend so much time thinking about Sarah Palin. They have devoted their daily lives to her. What irony. Imagine this exchange between a mother and child:

“Sweetie, what would you like to be when you grow up?”

“I would like to devote the majority of my time destroying someone’s reputation, Mommy.”

Actually, kids don’t say things like that because no one wants to grow up to be something like that.

The funniest part, which I found out later, is that the main blogger is respected in the high-traffic liberal blogs. She is RESPECTED there! Laughable.

Sooner or later these people are going to realize they are spinning their wheels. They have already convinced everyone they are ever going to hope to convince (Kool-Aid drinkers all) and have earned the disgust of people on both ends of the American political spectrum who still have principles.

These kinds of bloggers are a joke to reasonable people. Unfortunately, there is another kind of Palin-bashing that is truly sad. Many of the haters are not just bloggers who spend their time trashing people but are actually masquerading as public servants. When you defy your own party’s establishment for being corrupt and then, later, campaign against the “messiah” of the other party, those folks can get pretty ticked off.

Example: Last year, the Alaska Legislature adopted a resolution praising Wayne Anthony Ross for his service to Alaska. It passed unanimously. Here is the text. Sarah Palin nominated him this year to serve as Attorney General. They balked. Palin rightly called it what it is — hypocrisy. It’s also politics as usual.

I fear not. Do you know that old saying, “I’ve been insulted by better people than you?” I think of that when I recall the era of Bill Clinton. Here’s a flashback for ya.

The idea of LeviJohnstongate, Leaving the State for 36 HoursGate and Wearing an Arctic Cat JacketGate doesn’t seem to be much of a problem for most people outside of the clueless liberal blogosphere which still maintains the tea parties are partisan despite the booing of GOP Congressmen and placards slamming Republican support for bailouts.

Don’t worry, folks. Sooner or later, Obama is going to tax Kool-Aid and then they’ll wake up.

Thanks for your time, dear readers. Keep the Faith! May God bless you and keep you.