Election 2014: Are Democrats Bailing On Obamacare? 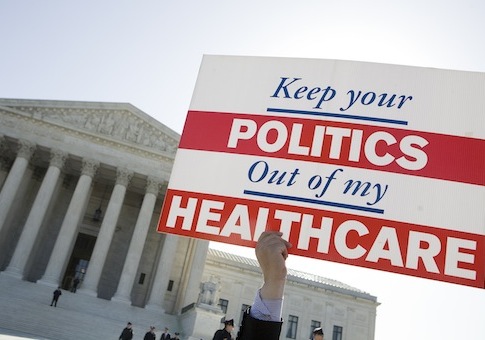 The 2012 Supreme Court decision declaring Obamacare, aka the Patient Protection and Affordable Care Act, constitutional should have put the issue to rest. Only, it isn’t.

Only, Republicans in Congress are still bristling at Chief Justice John Roberts’ unexpected deciding vote in favor of the president’s signature legislative accomplishment.

Only, after more than 30 votes in the US House to repeal the federal takeover of America’s healthcare system, it’s anything but over.

Only, the president’s decision to delay implementation for one year (possibly illegally) for businesses with more than 50 workers (the portion of this legislative monstrosity called the “employer mandate”) is de facto acknowledgement that the law is so cumbersome, costly and filled with unintended consequences as to be essentially unenforceable.

Oh, that and it’s now more unpopular than ever and in just months, campaigns for the 2014 off-year elections will start ramping up. And no one in the White House, or down Pennsylvania Avenue at the Capitol, has forgotten the role Obamacare played in returning the US House to Republicans in 2010.

Not Barack Obama, whose administration has been reduced to governing by executive order ever since. Not Nancy Pelosi, who dreams of once again holding the Speaker’s gavel. Not John Boehner, who knows very well what it took to win back the tenuous majority he manages.

And certainly not Republicans in the US Senate who realize Obamacare has the potential to trump all the scandals with our scandal-fatigued electorate as legitimate grounds to oust Harry Reid from his post as majority leader in the upper chamber.

Looking back to 2010, on Election Day, 49% of American voters held a negative opinion of Obamacare to 42% who held a favorable opinion. This -7% net-negative is critical, because for Democrats it market the untimely low-point in Obamacare’s election-season collapse.

Just several months previous, in July, 50% of American voters held a positive opinion of the law, to just 35% who held a negative opinion, a +15% net-positive for the law. The -22% collapse Obamacare would undergo over those coming months would play out for Democrat supporters at the polls, as voters returned a Republican majority to the U.S. House.

Bear in mind, just two years prior, and again two years hence, liberals who stayed home in 2010 would turn out in record numbers to twice send Mr. Obama himself to the White House. And while the president appears unscathed by his signature act, it is proving a woeful albatross around the necks of Democrats in tough races.

With that in mind, let’s look ahead toward 2014 and the potential minefield Democrats and liberals who have become staunch defenders of, and repeat voters for, Obamacare, must face.

Today, according to Elizabeth Mendes at Gallup, 52% of Americans disapprove of Obamacare, to just 44% who approve. This -8 net-negative situation presents Republicans with an even greater opportunity than 2010.

As Mendes notes, this disapproval rating is up dramatically from just last fall, when 45% of Americans disapproved. Are we witnessing another Obamacare collapse in public opinion? It’s entirely possible. Over the past several months, new reports have been released detailing more unintended consequences of Obamacare, from skyrocketing insurance premiums to increases in job loss projections because employers can’t afford the added cost of mandated coverage.

Now that a precedent has been set, in which Democrats delay the implementation of their own unpopular laws based on the convenience of the election calendar, the ultimate irony arises if Obamacare is never fully implemented.

Right after the 2014 mid-terms, the 2016 White House campaign of Hillary Clinton is expected to begin—and the irony being, this all began way back in 1993 with her failed “Hillarycare” which helped set the stage for the first public rebuke of her husband’s presidency, and contributed to the Republican landslide of 1994.

Elections aside, if Obamacare continues its downward spiral with the voting public, it may not be long before the votes to repeal in the House are no longer partisan issues.