President Obama is on the road again. 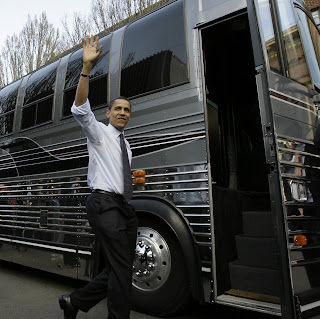 Never missing an opportunity to waste taxpayer dollars in an increasingly desperate effort to get a second term, Obama will take his “pass this bill/it’s not my fault” tour to Virginia and North Carolina this week.

That certainly makes sense as both are traditional swing states that Obama won in 2008 and where he is polling well below 50% against most of the Republican contenders (on average Obama is at 46% in North Carolina against the Republican top-tier and 42% in Virginia in recent polling).

The problem for Obama is that while he is re-running 2008’s campaign (at least geographically), the 2012 race is shaping up very differently.

Here are some other states in which Obama is well below 50% on the ballot against most potential Republican challengers:

Those are six states that have been reliably Democratic over the past four Presidential cycles.  In each, Obama is well below 50% on the ballot against, at this point, much less well-known Republican opposition.

For voters who are not hard-core base partisans, most incumbent re-election votes become choices about whether the incumbent has earned another term in office.  Presidential elections follow this pattern even more strongly because of the ease with which voters can make judgments about the direction the President has taken the country.

It seems wrong to offer the other side free advice, but the Obama team might look at re-directing some of their taxpayer-funded campaigning to big, recently reliable Democratic states like Pennsylvania, Michigan, and even New Jersey rather than wasting money in states like Virginia and North Carolina that may not matter if they don’t literally cover their bases first.  But then again, I hope they don’t.

Of course, if there’s one thing we’ve learned over the last four years it’s that this Administration is really bad at doing anything with taxpayer money other than squandering it on bad ideas that don’t accomplish much.  So maybe what they’re doing this week shouldn’t come as that big of a surprise after all.

FL Sheriff Has Some Advice for the 'Millions' of People Moving to the State on How to Vote
Townhall
Norfolk Police Department fires officer who was outed for donating $25 to defense fund for Kyle Rittenhouse
Twitchy
WARNING: Bodycam Video of Columbus Police Officer Shows Shots Fired To Prevent Stabbing of Another Person
Redstate
New Dispatch From The Brady White Files: Why Risk Your Life if You're A Cop?
PJ Media