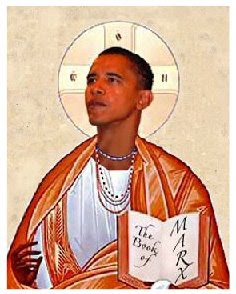 The American Psychologist Association (APA) has identified a new, debilitative mental disorder today in hopes that patients will seek help. The new syndrome, Iconographic Desire Influenced by Obama’s Terrificness Syndrome (or IDIOT Syndrome), has been identified in at least one case in Cincinnati, Ohio.

This mental disease manifests itself in an acute desire to collect photos, bobble head figures, coffee cups, T-Shirts and other items emblazoned with the iconic, religious figure of Barack Obama or the spiffy red and blue “O” logo developed for his permanent campaign.

The disorder can cause psychotic breakdowns, violent behavior, disregard for personal responsibility, sudden disdain for friends but an unhealthy need to be loved by enemies, instant arrogance or undeserved self-esteem, TelePrompter dependence, and flights of fantasy.

The worst cases present as an intense worship of The One, delusions of his beneficence, blind assumptions that he’ll buy the sufferer a house and a PlayStation, yet also exhibits a curious unconcern over the safety of the nation.

Sufferers are known by a near orgasmic trembling in the voice when discussing politics, an irrational and instantaneous mood swing to fury when criticism of the messiah is voiced by friends or family, an assumed state of self-assurance approaching arrogance, coupled with a complete lack of concrete knowledge of any facts on current or historical events.

If you know anyone with this syndrome, call your nearest psychiatrist or arrange a visit to a nearby mental health facility.

If you live in Hollywood, there is no hope for you. Quickly sell any property you have or business you might be unfortunate enough to own and move to Colorado.

Due Process Applies to All, Even Police Officers
The Heartland Institute

Is Lisa Murkowski Going to Run Again? She Better Not After Her Latest Vote
Townhall
LeBron James' 'you're next' tweet about officer who shot Ma’Khia Bryant got deleted (but here it is)
Twitchy
Joe Biden Releases an Absolutely Disgusting Statement on the Columbus Police Shooting
Redstate
Insanity Wrap #191: Did Jury Intimidation Play a Part in the Chauvin Verdict?
PJ Media