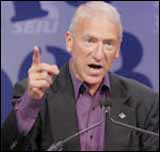 Andy Stern, president of the Service Employees International Union (SEIU) appears to be warning his membership that there is no lock on allegiance for Arlen Specter even though he has recently jumped the GOP ship for the Democrat Party.

On May 3, Stern used his twitter account to praise Congressman Joe Sestak, a possible 2010 opponent for Specter for the Democratic Party nomination for Penn. Senator.

Is this a shot over Specter’s bow? Is the president of the powerful SEIU warning Specter not to expect its fealty just because he is now a sudden Democrat?

Of course it is. After all Specter announced that he does not support a favorite union effort, the Employee Free Choice Act (EFCA) — the much derided card check bill — and Stern is a leading proponent of that legislation.

However, don’t expect Specter to stay true to his word on the EFCA. It is likely that he’ll quietly switch from opposing the bill now that he is once again a Democrat as he was when he first entered politics in the 1960s.