AP Barf Alert: Obama Has no 'Rookie Jitters,' is 'Extraordinarily at Ease' as President 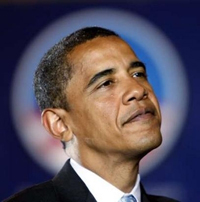 I am not a doctor, but I play one on the Internet. So, take the following as a prescription for what ails you. Now, if for some unexplainable reason you have been feeling queasy since November of last year, if you have felt like you want to throw up but just can’t seem to get that bile to overflow, well I have a little something here that will surely cause that gag reflex to result in a healthy expulsion of bubbling acids. The Associated Press would call it a “news story,” but it serves a far better purpose as syrup of ipecac than anything else.

Anyway, if you need a ready emetic, try giving a read to our pal Liz Sidoti’s doting portrayal of President Obama as a “no jitters” expert that is “extraordinarily at ease” sitting in the big chair. He’s a fellow that has mastered the office even though he has “youth and inexperience,” and he’s Confident almost to a fault.” Obama is the greatest story ever told as far as Liz is concerned… and after only four short months in office to boot.

But, wait. There’s more puke inspiring sycophancies yet to come… read on if you dare.

It’s hard to believe how absurdly over-the-top this AP report is, but there is no end to the lionization of a still very wet-behind-the-ears president that has yet to see the challenges that will truly prove his mettle. Yet, if one were to read this AP piece, one would surely come to the conclusion that this is the most wildly successful president ever in our history — even though he’s barely taken office.

I won’t bother you with the “specifics” of this piece of dreck, but I will relate a list of the laudatory words and phrases used in this piece of… I mean piece. The sheer number of them is mind boggling. We even get another one of those ubiquitous “experts” to agree with ol’ Liz that Obama is the bestest prez evah.

But the main point here is that the AP has deemed him a great success after just four short months. This is the most absurd thing about the media fawning that Obama has seen bestowed so lovingly upon him. How do we deem a president such a success in so short a time? Should we jump to that conclusion so quickly, before he’s even really seen all that he will see as president? Is it so impossible to realize that he could become the greatest flop since Bill Clinton whose final analysis was that he was one that “never wasted so much potential” in office even as the press lionized him for most of his eight years?

Sure we can say that he may rank as one of the best when all is said and done. But the singular fact is, we DO NOT KNOW and cannot know how his term(s) will turn out. It is stupid, just plain stupid, for the AP to be publishing stories pronouncing Obama’s success only four months into office. Not only is it stupid, but it is dishonest and even harmful. And it certainly is little else but PropOganda.

Finally, let me contrast this a bit with how the Old Media treated George W. Bush in his first few months in office. He never got a “honeymoon.” From the second he stepped into the White House and began having success after success with his pre-9/11 agenda, the media tsked him because he had “no mandate” due to his close election. The media had not one second of praise for his successes until 9/11. And then they gave him about 15 minutes of relief before starting back in on him again.

Like I said, Obama may end up the best of the best (though I certainly doubt he will) but that will be a determination that can only be made as he ends his days in office. At this point and time, however, he is a neophyte that has yet to show any signs of his eventual status. He is a man that has not yet begun to prove his worth to the country and posterity.

Anyone that says he is already a “success” is either a fool or a propagandist. You decide which Liz Sidoti happens to be.