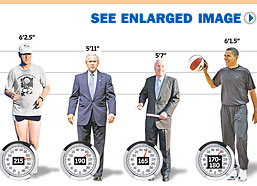 Remember during Bush’s run for the White House in 2000 when it was announced that Dick Cheney was his choice for vice president and the media meme became that Cheney added “gravitas” to the ticket? This is a small example of manufactured news. It wasn’t the fact that Cheney added much to the ticket, but that the media universally adopted a single word to describe the effect that Cheney had on the race. This is an example of the herd mentality in the Old Media. Sometimes, like with the choice of “gravitas” in 2000, that herd mentality is somewhat innocuous. But, other times it becomes an impediment to truth. Paul Campos found such an impediment a few weeks ago with the ridiculous worry that Barack Obama was “too skinny” to become president.

Saying, “This is a cautionary tale about how journalism sometimes gets practiced in contemporary America,” I find reason to agree with Campos’ assessment. He came to the conclusion that the “contemporary media echo chamber” has come to operate by “mistaking its own weird little obsessions for the actual concerns of the audience it’s supposed to be edifying.”

The story Campos settles on was the silly notion that made the rounds that Barack Obama was too skinny to be president.

A few weeks ago, a Wall Street Journal reporter named Amy Chozick got a bright idea for a news story: In a nation where according to our public health authorities nearly two-thirds of the adult population is too fat, is Barack Obama too skinny to be elected president?

It turned out that Chozick’s methods to “investigate” her story were less than satisfactory. In fact, she pretty much just made it up out of whole cloth.

Here’s the method she employed to determine whether Obama’s skinny physique might be a problem for him in the presidential race. She posted the following message on a Yahoo Internet message board: “Does anyone out there think Barack Obama is too thin to be president? Anyone having a hard time relating to him and his ‘no excess body fat’? Please let me know. Thanks!”

And here the results she gleaned from this intrepid bit of journalism: A total of one purportedly substantive response from what Chozick characterizes as a Clinton supporter, but which reads like someone yanking Chozick’s chain. Nevertheless Chozick quoted this source — somebody going by the name “onlinebeerbellygirl” — to confirm the thesis of her story: “I won’t vote for any beanpole guy.”

After using this dubious support for her contention, Chozkick’s story made the whirlwind round of the Old Media for the next news cycle.

Yet within 24 hours this absurd exercise in creating news for the purpose of reporting it had taken on a life of its own. National and international media repeated Chozick’s findings. The Times of London ran a feature on how some American voters were supposedly concerned about Obama’s weight, citing (naturally) Chozick’s piece as evidence.

A ridiculous story, of course. But, we’ve seen this repeatedly. The “fake but true” Dan Rather Bush Military document story is a perfect example. This story was made up out of known fake records, but was aired and echoed by a compliant Old Media anyway. We’ve seen it many times.

Unfortunately, this isn’t a new thing. Fortunately, we are in an era when the Old Media can’t get away with it as easily as they once did. Not that this has stopped them from trying.

But one more observation is apropos here. Notice that this round of opprobrium is against the Wall Street Journal, perceived bastion of conservatives. It should be no surprise that the WSJ is easy for some members of the media to attack. Let’s see if they have the backbone to heap scorn on their pals over, say, the Edwards case. But, don’t hold your breath.