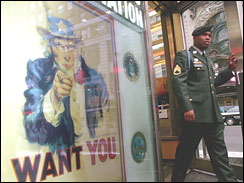 The Armed Forces Press Service issued a press release on Thursday morning, July 10, in celebration of the fact that the U.S. military has had 13 consecutive months of meeting and/or exceeding recruitment goals. Sadly, the media stayed sullenly quite all day, taking no notice of the success of our military on OR off the field.

Regardless of the fact that the media ignored the good news, there is good news, indeed.

The June recruiting and retention figures reflect recruiters’ hard work and young people’s continued willingness to step up and serve, Lainez said. The Army signed up 9,365 new soldiers in June, 101 percent of its 9,250-soldier goal. The Marine Corps recruited 4,531 Marines, topping its monthly goal of 3,934 recruits by 15 percent. The Navy met its goal of 4,209 sailors, and the Air Force brought in 2,203 airmen, six recruits over its June goal.

The numbers for the reserves and National Guard were also strong and retention also rolled on a pace.

Of course, when the media does bother to report on military recruitment being up they still have to focus on the supposed “unpopularity” of the war even as they report that the military seems to have little trouble making their recruitment goals.

So what about that “unpopular war,” anyway? Isn’t it affecting the armed services?

“There were concerns about how today’s fight would affect retention, and yet, retention has been as strong as any period in our history,” he (Bill Carr, deputy undersecretary of defense for military personnel and policy) said on the all-volunteer force’s 35th anniversary. “Volunteers want to serve; their performance is strong, their behaviors are strong, and their discipline is high.”

So, the big question is: where are the media on this?

Well, the answer would be that the media are in the same place on reporting healthy recruiting goals being easily met by the U.S. military as they are reporting on the incredible successes seen in Iraq. Consistently silent.

The media are obviously so out to discredit the U.S. military that they refuse to even report the news.