What Liberty Is and Isn't

One of (if not the) core issues in the ongoing health care debate is the nature of liberty. Most people, be they professing conservatives, liberals, or centrists, will at least pay lip service to liberty, acknowledging the American government’s role to preserve and protect the liberty of its citizens. Even so, as we explored in an entry last week, there is some debate regarding what liberty is and how it is best promoted.

This is a grid of the political spectrum as taught in most political science classes: 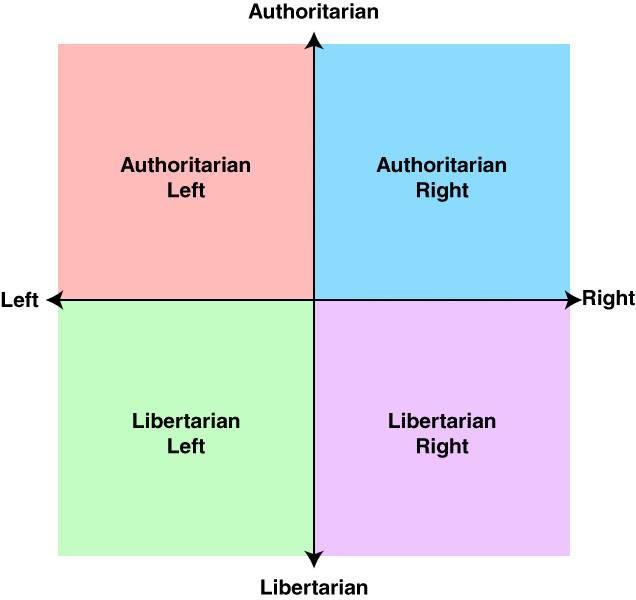 This is the spectrum we’re taught in school. It is a lie.

Upon cursory examination, one may be led to believe that there are Left-leaning libertarians and Right-leaning libertarians, and there are likewise Left and Right authoritarians. There may be some use in such distinctions; I am not aware of any. The interesting effect of this spectrum, from my perspective, is the tendency of people to primarily identify with Left or Right, rather than with authoritarian or libertarian. This, I believe, is a serious problem. It turns the debate we should be having, over whether government should interfere in our lives, to a debate over when it should. With the debate so framed, the state is in a favorable position to increase its authority regardless of whether “conservatives” or “liberals” are in power. Indeed, we have seen an ever expanding increase in government power since the founding, with an Gore-style “hockey stick” upturn in recent years.

Our debates need to be re-framed. They need to stop focusing on Left and Right and start focusing on Liberty. The following is an excerpt of an exchange between myself and a liberal poster on RightNation which I feel serves as a good example of how thinking needs to be changed. At the risk of demonstrating a degree of conceit, I thought it worth sharing. Keep in mind, these comments come from a series of posts, and therefore may not seem to have continuity:

Liberal: Except in some bizarre ultra-libertarian fantasies, NO government or society exists or can exist that has complete liberty. Even conservatives support government where everyone is entitled to be protected by the fire department, to drive/walk/bike on government constructed roads and highways, be protected by the government, potentially drafted by the government, have to [go] through security at airports, etc. etc. Are conservatives against liberty because they support the interstate highway system? Because they (generally) support the war on drugs? Because they support fire departments? An Army? Police?

Walter Scott Hudson: You mistake “complete liberty” for anarchy. Proper government is required for liberty. There can be no liberty in anarchy, because there is no protection of individual rights. Proper government promotes liberty by recognizing and protecting individual unalienable rights. I know of no one who is against the interstate highway system, likely because people recognize its presence and maintenance actually promote their liberty, giving them the ability to travel as they please and have greater access to commercial imports from other areas of the country. The maintenance of infrastructure is a broadly recognized role of proper government. Similar qualifications can be made for all your examples, with a notable exception. The war on drugs is certainly an anti-libertarian crusade.

Your perception of Left and Right is skewed, which isn’t your fault; you’re just believing what you’re told. You say “a far leftist [as opposed to President Obama] would have us out of Iraq and Afghanistan by now.” Well, maybe by your accepted definition of Left. A true far-leftist would advocate total government control of everything, and would therefore likely maintain wars if they could be argued to serve his state’s interests. By that more accurate spectrum, Obama’s position on the war is on the left. That spectrum also places his positions on wiretapping, torture, rendition, and “most of Bush’s domestic security polices” on the left. You see, you’ve been lied to… Obama is a statist who has only pretended to care about the libertarian causes which the faux “Left” claim as their territory, just as Bush only pretended to care about the libertarian causes which the faux “Right” claim as their territory. In truth, both men are statists, anti-libertarians.

Liberal: Politics is a lot more complicated than just “freedom” vs. “control”…

Walter Scott Hudson: It’s really not. I mean, insofar as the political spectrum is a construct of intellect, a tool we use to try and understand our reality, sure, you can define it however you like. I would submit the most useful spectrum runs from anarchy through liberty to oligarchy, no government to proper government to tyrannical government. Anything else is just an attempt to confuse people, in my view. I know what you’re saying; I’m no stranger to the diamond grid with left, right, libertarian, and authoritarian. I just think it’s a lie, a tool for teaching a kind of relativism. For example, there’s the view that fascism is somehow right-wing authoritarianism while communism is left-wing authoritarianism. Of what use is such a distinction? Either way, it’s authoritarianism! The diamond spectrum also neglects to account for anarchy, placing it as the extreme of libertarianism (as you just did) which is not true. No true libertarian is an anarchist.

Liberal: I agree with your reasoning about the interstate system about how it’s a good thing. However I disagree with you that it somehow is not treated as an entitlement and is compatible with the absolutist ideas about complete liberty you espoused. It IS an infringement on liberty. You are forced, through the threat of force, to help pay for a government created service whether you use it or not. It is the government taxing the people to provide a public good accessible to all.

For example, I could use your justifications for an interstate highway system to call for government provided universal health care system. It increases liberty: you can’t have liberty if you aren’t alive. You can’t reasonably pursue happiness if you are very sick and can’t get treatment. In the industrialized world, government provided health care or health insurance is a broadly recognized role of proper government, every other rich industrialized nation has it. Now you may disagree with the facts I use to reach that conclusion, that government can provide universal health care efficiently, etc. But ideologically, it’s resting on the same rationales about government that you use to justify the interstate highway system.

Walter Scott Hudson: It’s real simple… You’re not seeing it because you continue to cling to this misperception of what liberty is, that any tax for any purpose is an infringement, that any provision of government is entitlement. It is not. There is a difference between providing infrastructure as a means for commerce and transit and providing for the ends for which that infrastructure exists. Government provides roads and highways so you can get to your grocery store and your grocery store can take delivery of inventory. Government does not provide the actual store, the actual food, or the actual vehicles by which any of the transit or commerce takes place. Taxation to fund infrastructure is not an infringement, as no one escapes the benefit. It is not redistributive. You do not tax this group over here to provide roads only for some other group over there. Everybody gets roads, and they all benefit in precisely the same way. No one is left wanting.

Now let’s look at health care. You state “you can’t have liberty if you aren’t alive,” implying the government is therefore obligated to ensure everyone lives, that the government has been somehow negligent for 200+ years because it has up ’til now not provided for everyone’s continued existence. Well, health care isn’t the only thing we need to keep us alive, is it? We also need food, shelter, a healthy environment, etc. Is the government responsible for providing all that? Should the government be providing the grocery stores, and the trucks to deliver the food, and the food itself? Should it be providing our homes, our means of getting to the store, our shirts and shoes so we can get service? Clearly, there is some principle you are missing which society has taken as self-evident, a principle which has kept all that provision from happening. What could it be? I submit liberty is not contingent upon whether you live or die, as you state. If it were, why would people die for liberty? Liberty is about having the ability to govern how you live and die, not whether you do. You are incorrect when you say the argument for universal health care rests on the same ideological ground as the justification for the highway system. Universal health care would translate not as the highway system, but as universal public transportation; everyone gets a car or (more likely) rides a train or a bus. I think we both know how that would work out. The highway system is infrastructure, not transit. The health care system is likewise infrastructure, not care. Our problem is the dead ends, cul-du-sacs, and windy roads to nowhere in the health care system are not as obvious. The answer is not to provide everyone with care, but correct the faulty infrastructure so people can go about their business undeterred, so they can govern how they live and how they die.

Forgive me if the rest of the world, industrialized or no, is not my model for correct behavior. America stands as a result of rejecting the rest of the world’s answers and seeking something better, namely liberty. America also stands as the last historical result of exodus, the last possible exodus this side of cost-effective interplanetary colonization. It is more important than ever that we retain our exceptional nature as a bastion of liberty, because there is nowhere else for the oppressed to escape to. If, on the other hand, you feel underserved by a lack of government provision, these other industrialized nations you so adore stand ready to accept you.

What are your thoughts? What is liberty?

The Lincoln Project Is Hanging on for Dear Life

Justice Kavanaugh Just Boiled the Abortion Debate Down to Its Most Fundamental Core
Townhall
Alec Baldwin tells George Stephanopoulos that not only didn't he pull the trigger; 'The trigger wasn't pulled'
Twitchy
Dr. Fauci and Jen Psaki Tag-Team a Presser That Devolves Into a Mind-Bending Disaster
Redstate
10 Things You Need to Know About Today's Oral Arguments in Dobbs v. Jackson Women's Health Organization
PJ Media