Update from the Alternative Fuel Front

Remember $4.00 gasoline? (Hint: It was just one year ago…) How there was no need to Drill, Baby, Drill because we needed to get Big Oil interested in pursuing alternative fuels? Besides, a new discovery in ANWR or on the 85% of the Outer Continental Shelf that is currently off-limits to exploration would be five, maybe ten years away from commercial production, so what’s the use??

Well, Big Oil got interested in a big way. BP (Beyond Petroleum, har!) and ExxonMobil, two of the biggest of Big Oil, each threw down in the sure-thing, wiz-bang biofuels industry.

So … how’s that biofuel working for you, guys?

BP Gives up on Jatropha for Biofuel

The not-with-a-bang-but-a-whimper end to BP’s jatropha adventure underscores a couple of key points. First, the inedible but hardy plant that just a few years ago seemed like it could revolutionize biofuels has turned into a bust. The initial attraction was that it grows on marginal land, so it wouldn’t compete with food crops. But marginal land means marginal yields. And jatropha turned out to be a water hog as well, further darkening its environmental credentials. …

And this wasn’t a piddling venture, as far as jatropha experiments go: Reuters notes that BP and D1 Oils planted more than 200,000 hectares [494,000 acres, or 772 sq miles] of the stuff—25% of the worldwide jatropha planting. 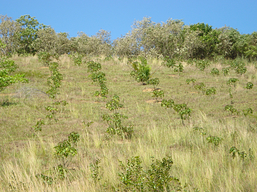 Biofuels Bonanza: Exxon, Venter to Team up on Algae

Exxon’s $600 million deal with Synthetic Genomics to brew fuel from algae could mark a coming of age for alternative fuels.

As human genome mapper Craig Venter, now the chief executive of SGI said, turning algae into biofuel simply won’t happen without Big Oil’s deep pockets. He said it was the biggest program he knows of worldwide to produce biofuels.

At the same time, both Exxon and SGI were at pains to stress that the “collaborative research project” is in its early phases. “There’s no guarantee of success,” said Exxon’s vice-president for R&D, Emil Jacobs. “We’re giving a new reality to the timelines” of algae biofuel development, Mr. Venter said.

“New reality to the timelines?” Say what?!

Exxon’s Mr. Jacobs said it would be “five to ten years” before small-scale plants are up and running. And neither company wanted to put a pricetag on the fuel produced from algae, which with today’s technology is still vastly more expensive than gasoline.

Seems like it might be prudent to continue on with existing, proven technologies (oil, natural gas and nukes, to name three), just on the off-chance that this algae deal turns out to have some technical or economic problems. There’s not a single alternative on the horizon that can compete with conventional fuels in terms of scale.