"Not In My Back Yard", Indeed! Texas Leads the Way to Energy Security

Here’s a link to her Op-Ed piece in the Wall Street Journal highlighting the success of the Barnett Shale natural gas play near Fort Worth.Link may require subscription. 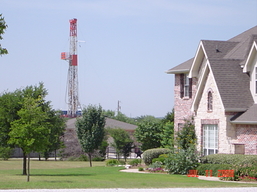 For those of you of the Yankee persuasion, the rig is a temporary structure that is used only in the drilling phase of a well – a few weeks at most.

[While] Congress balks at drilling in the Arctic National Wildlife Refuge in Alaska out of fear of disturbing a few caribou, [Texas has] moved ahead to safely tap into an energy reserve located underneath suburban homes. And there is no better example of how Texas gets the balance right between energy and the environment than the development of the Barnett Shale.

Today, the price of natural gas is $9 per MMBtu, (one million British thermal units), up from $3 per MMBtu in 2000. As a result, more than 7,500 wells are producing today in the Barnett Shale, 10 times the yearly total in 2000. In 2000, the Texas Railroad Commission issued 273 permits for the Barnett; this past year we issued 3,140 permits. The Barnett Shale alone produced 1.2 trillion cubic feet of natural gas last year. This field is sometimes referred to as a “17 year, overnight success.”

Unless I’m mistaken, the Newark East (Barnett Shale) Field is the #1 gas producing field in the nation, from rocks that were deemed not economically productive just a generation ago.

But it’s not just the producers who are reaping the rewards. Dallas Fort Worth Airport and many cities, including Fort Worth and Arlington, will be receiving hundreds of millions of dollars in lease bonuses and royalties from natural gas wells over the next 25 years. [Not to mention the royalties and lease bonuses received by the thousands of homeowners, and the thousands of jobs provided, directly and indirectly, by all of this intense activity. – Ed.]

A large new development sits under Shreveport, La., and stretches into Arkansas and Texas. Right now, energy companies are poised to tap into what may be the largest natural gas find in the continental U.S. And as the drilling starts up, they will be using techniques pioneered by Mr. Mitchell and perfected in the Barnett.

We have a lot to learn from the success of the Barnett Shale. One is that we have a lot of resources and ingenuity right here at home. Unfortunately, we have a lot of politicians who are reflexively antagonistic to any answer that does not come out of a Washington think tank.

We are heavily dependent on fossil fuels; with a growing economy the size of ours, fossil fuels will be important for generations. It would be foolish to forsake oil and gas technologies to put all our chips on some new technology, no matter how brilliant it seems. Remember ethanol?

I am in no way arguing against development of alternatives. Rather, unconventional gas was, in effect, an alternative fuel, but one that had a lot of advantages, and one that just happened to work out. Today, some 43% of natural gas supplies are from sources that were a pipe dream when I graduated from college in 1978. Natural gas research may provide a template by which multiple future alternatives can be pursued until the small handful that make economic sense prove themselves.