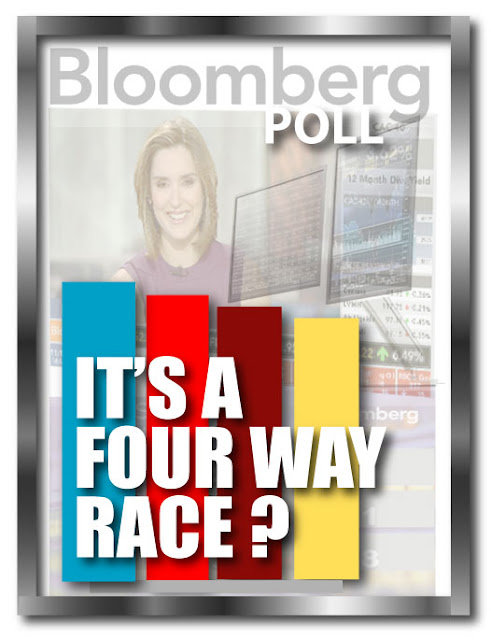 Bloomberg says, in its most recent poll that Herman Cain is at 20 percent, Ron Paul is at 19, Romney is at 18, and Gingrich is at 17 percent, running up to the Iowa Caucuses.

But the poll states that respondents, sixty percent of them, aren’t completely convinced and could still support someone else other than their top choice.

So, what good is the poll, you might ask?

Well, it at least gives us an indication of where a “target” group of voters, ostensibly a cross section of the electorate, are with regard to the candidates.

Even more than that it shows that the “field” has spread out to include more horses as contenders in the race than there were before, specifically two “front-runners:”  Now there are four.

Might there be hope then for Michele Bachmann and Rick Santorum?

The danger of polls, of course, is the same danger that the SLIME, or Socialist Liberal Media, provides, which is that either by design or by default, they “attempt” to cause or create WHO the candidates are, who the contenders are, and ultimately who the winners are.

The most prominent example of this is the “Ron Paul Phenomenon,” a campaign whose candidate is consistently “shorted” by the media, and yet he continues to do well in polls. While some might argue that Paul constituents in Caucuses and Polls, tend to “stack the deck,”  it should be noted that more than any other candidate base (thus far) Paulistas turn out to support their candidate more consistently and more often, and in more numbers than supporters of other candidates.

On the other hand a very observable trend evident in the SLIME is that they consistently, at least in the last few weeks, have shown a propensity to attack, either directly or by proxy (via other media or by repeating other media’s reports), Herman Cain.

In fact just yesterday the Milwaukee Journal-Sentinel was all-a-twitter with “news” that “Oh! Herman Cain was done as a candidate!” The SLIME rag was condemning Cain for failing to answer questions about the “Libya Situation,” apparently the way they felt he should answer them.

Cain was his characteristically, unjacketed, casual, er’ing and ah’ing, (yes, there’s video), stalling for time, asking his interviewers to repeat the questions, in what appeared to be a lesson on how to handle antagonistic propagandistas, whose sole aim was to get him to say something to shellack him with once again. I am happy to report that Cain did not provide them with much. Nor should he have.

The Journal-Sentinel threw a fit, as expected.

And of course, there were media moguls and parotting pundits that robotically repeated the reverberent murmurings of mesmerizing mantras advanced by the masters of political propaganda.

Yes, the journalist wannabe’s burst onto the airwaves after the interview, screaming bloody murder, about how unqualified this unconventional candidate is, and how he must absolutely not be the Republican Candidate in the 2012 general election, much less our next President.

The sad tale this told was that the psychotic screams of the hysterical town-criers echoed and bounced even from the pillars of Conservatism, from the Halls of Malkin to the shores of our Liberty Loving Limbaugh.

Somehow the SLIME still do not get that the more “they” attack Herman Cain, the better he does in the polls. Did I mention that Herman Cain was LEADING, albeit slightly, in the Bloomberg poll?

He is leading, mind you, after being, according to your favorite propagandistas, thoroughly shellacked with allegations of …. let’s see, what was it this time? Hmmm. I seem to have misplaced my notes.

Yes. Cain is in the lead in the Bloomberg poll. Pardon me, did I say that again? Mercy me.

Not only is he leading in that poll but Cain supporters just launched a major Super Pac (THE TEA PARTY FUND) that was borne out of another rapidly expanding Cain group called CAINROOTS, a website that formed nary a week ago and has quickly mushroomed into several thousand supporters, and is purportedly growing exponentially as you read this. (SEE CAINROOTS HERE)  These two activities did not replace Friends Of Herman Cain, the official Herman Cain Campaign team, but added to it.

Be advised that you will not hear of the Herman Cain successes from the SLIME, but you will hear about how he allegedly “stumbled,” on the Libya question.

But, mind you, neither the Polls nor the Pundits; neither the Propagandistas nor their SLIME, nor their journalist-wannabe’s, nor the “media” networks, nor the Socialist Chicago Mobsters, nor the farrow of financiers that bankroll the lot will determine your next President, for I suspect that history is being made even at this moment in time.

For the first time in a very long time, the President of the United States will be selected by YOU.

Will that be Herman Cain?

It will be if you make it so.

Let this election cycle, because of your efforts, your determination, your support, your purpose, your passion, be the one that not only bypassed the SLIME, but relegated it into irrelevance as the political instrument of the enemies of your nation, once and for all.