Has Your Candidate Been "SLIME'D?" 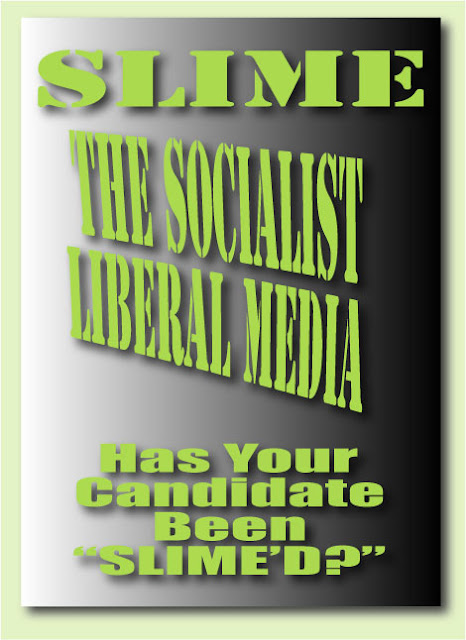 
Michele Bachmann and her campaign have apparently just realized that the SLIME, the Socialist Liberal Media, is “biased.”

They took issue with a pre-debate determination by CBS NEWS to limit the amount of questions that would be directed to Bachmann, because, according to PolitickerNY.Com’s Hunter Walker, Senior Politics Producer for CBS News, Caroline Horn said in an email, “…“I was just speaking with Alice Stewart, cc’d here, about the Congresswoman or a senior member of her staff joining you for the webshow,” to which CBS News Political Director, John Dickerson replied, “Okay let’s keep it loose since she’s not going to get many questions and she’s nearly off the charts in the hopes that we can get someone else.”

Apparently an email was mistakenly sent to someone at Campaign Bachmann, who then became aware of CBS’s “limiting” tactics. SEE FULL ARTICLE HERE

Does this show there was a planned effort to limit questions to Michele Bachmann at the debate? Absolutely.

Does this indicate “media” bias? Absolutely.

In fact, I find it quite ironic that candidates are even complaining about adequate media coverage, when the debates, while they appear to provide a service of informing the public at large, have in reality served only to ambush Republican candidates, forward and advance an “atomosphere of gotcha,” and have consistently been complicit in “helping along” Republican candidates toward their potential political demise.

Ask the Ron Paul Campaign if they have ever been ignored or slighted by the SLIME this election cycle?

Was the SLIME complicit in the smearing of Herman Cain? (Anyone?)

In an era, when the candidates should have, at least in principle, united in strategy to bring down the repressive regime of the Obama Administration, the Obama campaign is being helped along by the complicit (SLIME) media, both by ostensibly vetting candidates, determining who should debate and who should not, and then being used as the medium by which attacks are channeled by Republican candidates against each other.

While it makes for great spectatorism for Democrats and Socialists, it does not make for the intelligent focus of efforts against an arrogant force that aims to bankrupt this nation, surrender it to its enemies, and empty its Treasury and financial resources for its friends, political cronies, and its own dark purposes.

Are there not enough resources to create internet debates and interchanges that would help inform our eager publics?

In fact, the last period of the most recent CBS debate was actually “broadcast” over the internet.

Just how badly do Conservatives want to take their Government back?

How long before it is learned that no agenda based on the Constitution, or forwarding a Tea Party platform, will be given any quarter in any branch of the SLIME?

Even more ironic is that there is still time to change this. There is still time to bypass the SLIME and go directly to voters of any persuasion. New Media and how it is used from now until election day, might be a determining factor on whether Conservatives achieve victory or not.

In fact, not utilizing it to its full capacity, will only be to the detriment of our political efforts and to the nation, if we fail to wrest the reins of the nation from the clutches of our current National Socialist Colonizers.

Did You Catch What Biden Said About Our 'New Normal'?
Townhall
'Honey, do you even HISTORY?' Joy Reid SCHOOLED for pushing revisionist history claiming the parties MAGICALLY switched places
Twitchy
Biden's Slip of the Tongue About Kamala Harris at Bill Signing
Redstate
The Democrats' 'Joosie Smoolyay' Problem
PJ Media