Thank you. Thank you for standing up in the face of an adversary that despised you, mis-characterized you, lied about you, and even burned you in effigy. The American left is obnoxious, angry, and unhinged. Lesser men have folded their will and principle in the spirit of so called ‘bipartisanship and unity’. But you, as you so often reminded us, “stayed the course”. Thank you for ignoring their chattering criticism and for making difficult decisions in the face of enormous evil. I have appreciated your candid, if at times inarticulate, demeanor and style. I have laughed and cringed and facepalmed along with the rest of the nation at some of your “Bushisms”.

But you have always been a man of integrity and honesty. Your vision for the world has spread the light of freedom and democracy to dark corners of the earth, places in which those same chattering critics breathlessly declared would never be able to grasp the ideas that democracy and liberty encompass.

Thank you for your relentless pursuit of terrorists throughout the world. I can only hope that your replacement will continue the dogged chase, and that he too will help cripple the faceless enemy that threatens our existence. The world is better off today than it was in 2000. And though there is turmoil and uncertainty and death and war, there is also light and faith.

I have not always understood, nor I have always agreed, with your decisions. Your recent abandonment of free market principles has been mind-boggling. The corporate bailouts and golden parachutes have left a bitter taste in my mouth, especially so since The President-elect will use those funds and ideas to propel government spending and intervention into an unprecedented tailspin. I cannot, nor will I attempt to, defend the bailout fever that gripped your final months in office. However, I believe you made the decision to press forward down that road with the best of intentions. Intentions that, as you ought to have known, came with devastating and unforeseen results.

But we are safe. For now.

It is a great blessing, and a reflection of your effective presidency that our nation is in a position to gripe and complain at all. After September 11, 2001 there was nothing but questions plaguing the minds of each citizen. Our lives were forever changed, forever altered. The world was no longer a welcoming and encouraging place. In the blink of an eye it became dark and subversive.

But you did not fear. There were no interment camps of Arab-Americans. There were no propaganda wars, and there were no McCarthy-esque accusations and fear mongering. Within months our economy recovered, confidence grew, and our enemy was weakened.

Your legacy many not ever be appreciated. Your name may be a curse for generations to come. The whispering elites and the blowhard pundits, the terrorists defenders, and the treasonous, unrelenting radical left will never understand, nor will they ever care to understand, the sense of duty and honor that has driven your mission these past eight years.

But there are some of us who understand.

And for that, again Mr. President, thank you. 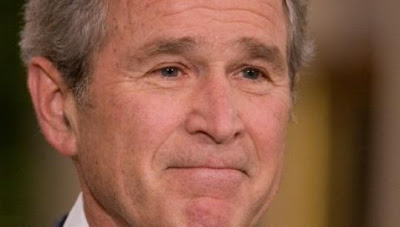