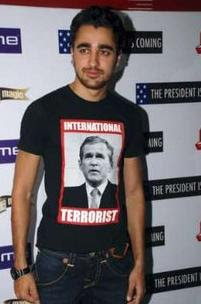 As the attacks in Mumbai, India have reminded the world, Jihad, and radical Islamic terror is still alive and well. Despite the election of a transcendent, all-encompassing, new world savior in America, the Jihadists are marching onward in their mission to destroy the infidel, regardless of his nationality or politics.

The megaphone Left, both domestically and internationally have spent 7 years calling George W. Bush a terrorist. In a twisted and disgusting irony, Muslim Bollywood star Imran Khan arrived at the premier of his new film in a “Bush=International Terrorist” t-shirt. While at that same moment, just blocks away real terrorists were on a killing spree. A brutal, murderous rampage that left hundreds dead, and a Nation in shock and mourning.

I wonder if the irony is lost on Imran Khan?

Radical Islam is real. It is not political fear-mongering from The Bush White House, nor is it an insensitive, racist and derogatory epithet. It is reality. It is our enemy. And it is a force and a movement that holds life in no distinct sanctimony or regard.

I wonder if today, Imran Khan, and his counterparts of the delusional Left still believe the War on Terror is an imaginary political scheme, carefully designed to spread fear through the world in order to secure oil contracts? Or, instead, have the attacks in India awakened people to the reality of radical Islamic terror? The gunmen shot down Muslims, Hindus, Christians, Jews and people of no faith or creed. They shot down people at random, people who were innocent of any crime, innocent of any ideological posturing or political campaigning. They killed indiscriminately and without remorse.

And they will do it again.

The next time you are tempted to agree with Barack Obama when he mentions downgrading the United States military, or argues for tighter, stricter gun laws, or encourages the world to better understand militant terrorists, remember Mumbai, and the helpless, under trained, unarmed police force that could only watch in horror as angry Muslims with automatic rifles carried out a carefully planned and executed killing spree.

The propagandists of the Left have declared that George W. Bush is a terrorist. It has been a chic, popular, leftist stance to oppose the War on Terror, those fighting it, and those leading it. And for those same Lefties, like Barack Obama, who have built political capital, and who have won elections on the back of anti-American rhetoric, it is an outrage to oppose the enemy causing such a war to be needed at all.

However, as President-elect Barack H. Obama must be realizing, and as the Bollywood elite have painfully come to know, the realities of an enemy that knows no boundaries are a stark and sobering truth. A truth that no amount of eloquence, and no amount of posturing will eliminate. 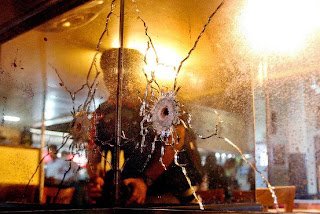