Barack Obama and the WPA 2.0

We’ll put people back to work rebuilding our crumbling roads and bridges, modernizing schools that are failing our children, and building wind farms and solar panels; fuel-efficient cars and the alternative energy technologies that can free us from our dependence on foreign oil and keep our economy competitive in the years ahead.

Where, exactly does Barack Obama think we live? America is not the war torn Italy of the 1950s. Nor is it a third world country struggling to modernize infrastructure. It is the United States of America. Our highway systems, our ports, our buildings and our technology are the best in the world.However, what Barack Obama has in mind is not primarily the improvement of our “crumbling roads”. It is rather, simply Obama embracing the “Obama as FDR” mantra that the media is trying to hammer home. Obama is obliging them with his very own WPA 2.0 proposal. A proposal that is laden with the dogma of dependency, just as the original New Deal was. 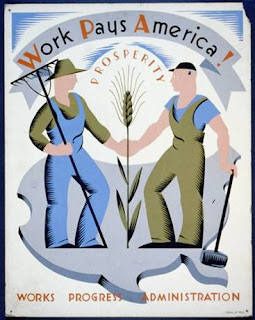 In the 1930s the Works Progress Administration (WPA) provided millions of jobs for Americans who needed them. Jobs ranged from digging ditches to painting murals to building bridges or playing music. When it was finally abolished, the Project employed 8.5 million people and cost over 11 billion dollars.

There are in my community still buildings and bridges and murals that were WPA projects. I am a big fan of the National Park Posters that were commissioned as WPA work. The WPA was a beneficial (for the most part) program at that time in American history. At that time the United States was a growing economy, trying to modernize factories and cities. There was a need for highway building as the nation expanded into the west.

And yet, still, the WPA had serious shortcomings.

Incentive for quality, speedy work was low. The Program was subject to the political machinations of the FDR movement, and the projects undertaken were not always useful, needed or wanted. The program also created a dependency on the government for work. Instead of promoting free market enterprise and entrepreneurship, the WPA simply provided risk free jobs to any and everyone who asked.

Obama has visions dancing in his head of a modern, greener WPA. He campaigned heavily on his goal to create millions of “green jobs”. 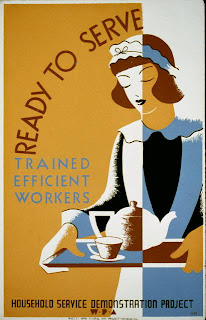 A stark difference in the WPA of old, and the new Obama Works Progress Administration is the method in which the program will be implemented. That is, Obama will require participation in the new WPA. He will mandate oil and gas companies to be more green and to invest and research in green technologies. He will limit the expenditures of traditional energy creation technologies in favor of unproven and costly alternative energy sources.

Like everything else about Obama, his energy and economic proposals are filled with unknowns.

Obama will require car companies to meet MPG and emission standards even more stringent the what already exists. Standards that are crippling American auto-makers today. Standards that are causing the Big Three auto companies to fail. He will require them to build hybrids, regardless of the the market demand for them. In the name of environmentalism and greenery, Obama will oversee the death of American automobile production. He will watch jobs flock to Toyota and Honda, as those two thriving companies flee back to Japan where they are free of the zealotry and idealistic greenery of the Left.

And so, he may commission people to draw pictures, write music, and fix pot holes. He may spend billions of tax payer dollars for city parks, bike lanes, murals and poetry. But to require and define the technological and economic progress (or lack there of) of industry is more of the liberalism of decay that has plagued this nation since the days of FDR. If people want cars that run on hope and change, then the market will comply. If people demand cars that get 50 miles per gallon, then the market will comply. But to create a product based on the ideology and dogma of a demagogue President will lead to the destruction of the free market industrialism and innovation that has created the greatest economy in the history of mankind.

As he did throughout his entire campaign, Obama is promising the eloquent damning of personal freedom. Let the people determine what is an efficient vehicle. Let the people, and the market determine what companies live or die. Let people create the need for new technology, new jobs and new industry.

The key to productive and meaningful job creation is creating a need for those jobs. The Free Market is the most efficient creator of jobs there has ever been. Barack Obama can’t create a need for certain goods and services. He will try, through mandates, laws, and policy that will bankrupt industries he disapproves of. That is the new WPA of Barack Obama. He will kill existing jobs in the coal, gas and auto industries, then propose an “economic rescue package” that puts people to work planting trees.

It is, as it always has been with the Left, the poison of dependency.

And when people are busy planting trees or installing “hybrid car charging stations” along our crumbling highways the press will swoon over the economy of greenery and the vision of the enlightened one, Barack Obama. As innovation diminishes and dependency flourishes the people will sit comfortably in the lukewarm mediocrity of government aided work projects.

Maybe Obama is right. Maybe we are on the verge of another Great Depression. 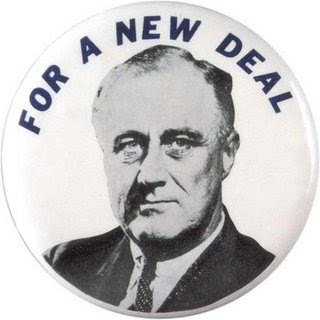 IN MY ORBIT: Monica Lewinsky and #MeToo, Both Remain Ill-Served
Jennifer Oliver O'Connell

The Celebrity Silence On the Emmy's Lack of Masks Is Deafening