The Puzzle of Dr. Norman Borlaug

By TheYeomanFarmer | Sep 13, 2009 8:44 PM ET
Share Tweet
Share
Tweet
Ever wondered why food today is so incredibly cheap and widely available? Why we no longer see so much footage of starvation and famine in third world countries? There are many reasons, of course, but much of it can be summed up in two words: Norman Borlaug. Dr. Borlaug passed away this weekend at the age of 95, and is generally recognized as the architect of the “Green Revolution,” the explosion of crop yields and farming productivity that occurred after World War II.

Dr. Borlaug’s initial goal was to create varieties of wheat adapted to Mexico’s climate that could resist the greatest disease of wheat, a fungus called rust. He accomplished that within a few years by crossing Mexican wheats with rust-resistant varieties from elsewhere.

His insistence on breeding in two places, the Sonoran desert in winter and the central highlands in summer, imposed heavy burdens on him and his team, but it cut the time to accomplish his work in half. By luck, the strategy also produced wheat varieties that were insensitive to day length and thus capable of growing in many locales, a trait that would later prove of vital significance.

The Rockefeller team gradually won the agreement of Mexican farmers to adopt the new varieties, and wheat output in that country began a remarkable climb. But these developments turned out to be a mere prelude to Dr. Borlaug’s main achievements.

By the late 1940s, researchers knew they could induce huge yield gains in wheat by feeding the plants chemical fertilizer that supplied them with extra nitrogen, a shortage of which was the biggest constraint on plant growth. But the strategy had a severe limitation: beyond a certain level of fertilizer, the seed heads containing wheat grains would grow so large and heavy, the plant would fall over, ruining the crop.

In 1953, Dr. Borlaug began working with a wheat strain containing an unusual gene. It had the effect of shrinking the wheat plant, creating a stubby, compact variety. Yet crucially, the seed heads did not shrink, meaning a small plant could still produce a large amount of wheat.

Dr. Borlaug and his team transferred the gene into tropical wheats. When high fertilizer levels were applied to these new “semidwarf” plants, the results were nothing short of astonishing.

The plants would produce enormous heads of grain, yet their stiff, short bodies could support the weight without falling over. On the same amount of land, wheat output could be tripled or quadrupled. Later, the idea was applied to rice, the staple crop for nearly half the world’s population, with yields jumping several-fold compared with some traditional varieties.

This strange principle of increasing yields by shrinking plants was the central insight of the Green Revolution, and its impact was enormous.

Particularly in sustainable agriculture circles, many point out that Dr. Borlaug’s Green Revolution, like every revolution, included its share of unintended consequences and created problems of its own. Chief among these: the industrialization and corporate domination of agriculture, the depopulation of the countryside, and squeezing out of small family farms. Modern farming is no longer conducted on a “human” scale, and the overwhelming majority of people in developed countries have lost all connection to where their food comes from.

I understand these sentiments well, and sympathize (at least in spirit) with much of the critique of modern industrial agriculture. These objections are a big part of why our family moved to the countryside several years ago and began doing our best impersonation of Thomas Jefferson’s “yeoman farmer.” However, I am under no illusions that it is possible — or even desirable — to put the genie of modern agriculture back into its bottle. Fertilizer is a prime example; the large confinement livestock operations have never been better at capturing animal waste, but even all that manure falls far short of what is needed to grow crops on the scale needed to feed the world’s population. Synthetic nitrogen fertilizers are a practical necessity. As Blake Hurst, himself a commercial farmer, points out in his excellent article, The Omnivore’s Delusion:

Norman Borlaug, founder of the green revolution, estimates that the amount of nitrogen available naturally would only support a worldwide population of 4 billion souls or so. He further remarks that we would need another 5 billion cows to produce enough manure to fertilize our present crops with “natural” fertilizer. … And cows do not produce nitrogen from the air, but only from the forages they eat, so to produce more manure we will have to plant more forages.

Hurst goes on to discuss the planting of cover crops (aka “green manure”) to supply nitrogen naturally, but demonstrates that this is both impractical and would remove a great deal of cropland from production. I love the Amish, and the way they farm, but we can’t pretend that Amish farming practices can feed the world.

Don’t get me wrong: I highly recommend the small-scale agriculture that our family is engaging in, and I hope that more families follow us in adopting this lifestyle. But it’s difficult to imagine “yeoman farmers” like ourselves ever being able to feed the world with what we’re doing. Heck, we can’t even (entirely) feed our own family this way…and we’ve met very few families who even come close.

We do produce all of our own eggs, and almost all of our meat, and what we can’t raise here (beef) we buy from a neighbor who does. But, even there, I need to be honest. Our egg layer and broiler chicks all come from a commercial hatchery. So do our ducklings, and our goslings, and our turkey poults. All the feed they consume was grown by “industrial” farmers and mixed up for us by the local grain elevator (with industrial-strength equipment). Our sheep are exclusively grass-fed, and our goats are largely grass-fed, but the does could not produce enough milk for us without supplemental grain from the elevator. Our egg chickens are free to forage, but their egg production would suffer badly without supplemental grain. In short, without the extraordinary crop yields and productivity of modern agriculture, we would not have the relatively inexpensive feed grains that ultimately make our family’s micro-farm possible. 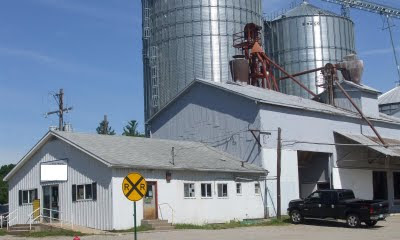 Perhaps the most important by-product of Dr. Borlaug’s Green Revolution is the shattering of Malthusian theories. Thomas Malthus argued that because population increases geometrically, but agricultural production only increases arithmetically, human populations would eventually outstrip the ability of farmers to feed them. Malthus and his modern disciples (such as Paul “Population Bomb” Ehrlich) therefore argued that stringent population-control measures were the only way to solve this dilemma.

But Malthus failed to anticipate the extraordinary manner in which technology and innovation could literally change the rules about agricultural output. As the late Dr. Julian Simon pointed out in numerous books and other research writings, human beings are not mere consumers of resources. Rather, we are truly “the ultimate resource.” Humans, because of our brains and intellectual ability, are equipped to solve problems and produce far more than we consume.

Particularly when markets are allowed to function freely and offer incentives for meeting the needs of other people, and governments protect property rights, human beings have proven themselves capable of coming up with extraordinary breakthroughs to solve the problems of food production. As others have put it, every child is born with a mouth to feed — but two hands to help work. And, as Dr. Simon would add, a brain to help innovate.

And that leaves us with a puzzling final observation. Despite his personal experience in revolutionizing the way food is produced, and having witnessed first-hand the ability of human intellect to find new ways of feeding a growing world, Norman Borlaug was and remained an advocate for the population-control movement. His references to “the population monster,” and other similar formulations, even hint at an underlying misanthropy in his beliefs — as if the problem is too many people in the world, rather than not enough freedom and market incentives for innovators to find ways to supply the needs of those people. I greatly admire what Dr. Borlaug was able to achieve in his work, but am left wondering why he could not recognize the profoundly anti-Malthusian implications of his achievements.

Cross-posted at The Yeoman Farmer.

The Number One Thing Driving People to the Republican Party